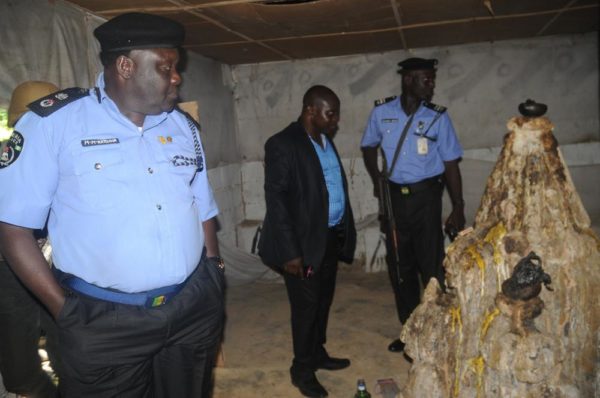 OYO STATE COMMISSIONER OF POLICE, CP MUHAMMED KASTINA (R) AND HIS MEN AT
THE FAKE CURRENCY FACTORY, IN ISESE OF BADAKU VILLAGE IN IBADAN ON MONDAY (1/6/15)

Oyo State police authorities on Monday discovered what they have described as a “factory” that produces fake currency in Ibadan.

Punch describes the factory as “a place in a remote village of Ibadan, where thousands of fake pounds, euros, dollars and other foreign currencies were being produced.”

A 43-year-old man named Ismail Adesina was arrested at the scene, however; he claimed he knew nothing about the factory.

“I am a herbalist and I inherited the skill from my father. I am also a conman. I cured diabetes, barrenness, blindness and other ailments. I have cured many people. My partner, who escaped yesterday, knows how the currencies were produced. Taju and Wasiu are my other partners. We have been here for about four years. We collected varying sums of money from our victims but we do not kidnap people. We bought the land in the bush and built the houses. I am a native of Beyerunka in Ibadan. The names of our victims are with my partners,” Adesina said.