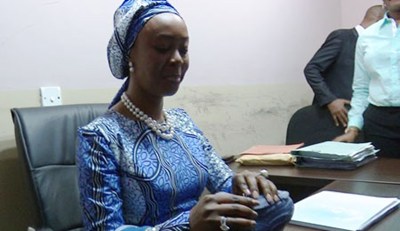 Toyin Saraki at the EFCC office

ThisDay reports that the questioning was conducted on Tuesday, and five senators and 20 House of Representatives’ members, including the Speaker of the Kwara State House of Assembly Ali Ahmad, accompanied her to the EFCC office. She arrived at the their office at 12:30 pm and departed at 6:15 pm.

The senators who were with her include Dino Maleye, Peter Nwaobosi, Abdul Abubakar, Binta Mashin and Isa Misau.

After the visit, her private secretary Hakeem Olagoje, released the following statement on her behalf:

As a citizen with the utmost respect for the highest standards of transparency and democratic accountability, Mrs. Toyin Saraki visited the EFCC today as per their invitation.

Mrs. Saraki made herself available to assist the commission wholeheartedly with any lawful enquiry they may have. Following today’s visit, Mrs Saraki will continue to cooperate fully with the EFCC and hopes for a prompt and positive resolution in satisfaction of this enquiry.”

Having placed an emphasis on the importance of accountability, transparency and diligent reporting, Mrs. Saraki maintains that she has always operated within the law and to the highest standards of global compliance in all of her activities.

Mrs. Saraki reaffirmed her willingness to assist the EFCC and expects that the spirit of this enquiry will follow the global standards and principles of open democracy, transparency and impartially that the EFCC and other similar organisations around the world are founded upon.

Mrs. Saraki looks forward to drawing a line under the matter and continuing in her global advocacy on maternal, newborn and child health.