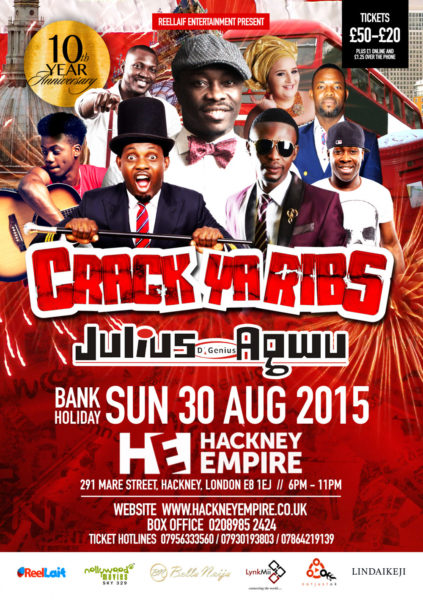 Ace comedian Julius Agwu will be staging the 10th anniversary of his annual comedy show, Crack Ya Ribs at the Hackney Empire in London on Sunday August 30th, 2015.

He also has plans for an anniversary tour set to start in Aberdeen on August 22nd, 2015 at The Beach Ball Room.

The comedian, who recently survived brain surgery, will start the show with praise and worship.

Speaking ahead of this year’s show, Julius said the 10th anniversary of the event is a confirmation of God’s faithfulness and grace over the years. He added that his choice of Korede Bello as the focal musical act of the event is because God miraculously healed him and that could be only interpreted in Korede’s latest hit, God Win.

He stated, “In the last one decade, we have been staging Crack Ya Ribs show in London to the delights of the people and built great followership. Aside being the first Nigerian entertainer to stage such shows in London, we have stayed committed to the cause of laundering Nigeria’s image with it positively and consistently in the last 10 years. Like I always say, entertainment still remains the only way to promote the country’s image positively around the world due to the immense attention we are currently receiving”.

Watch a clip below.