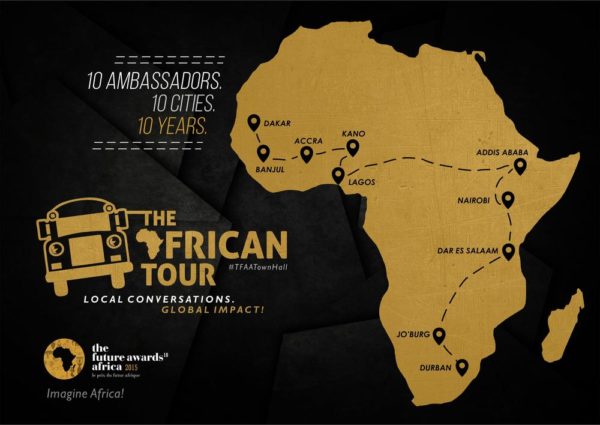 The Future Awards Africa (TFAA), Africa’s youth awards will be touring 10 African cities to host town hall meetings as part of run up to the 10th edition of TFAA set to take place in December.

“Young people across the continent are becoming increasingly aware that tackling the issues and collaborating on unique solutions can generate powerful multipliers effect that create wide-ranging impact—not only in their local communities and countries, but also in the rest of Africa,” said Mfon Ekpo, Executive Director, The Future Project (TFP). “We need to ensure these voices are heard and recognised as a rich source of inspiration and ideas that will transform our continent, and TFP is excited to help take these first steps,” He continued.

The theme for TFAA’s 10th anniversary is ‘Imagine Africa!’, chosen to highlight young Africans who are fulfilling the promise of the continent by conquering the unlimited frontiers of imagination.

Nominations are open to the general public for individuals or teams above the age of 18 and no older than 31, who have been able to create incredible impact and well-documented accomplishments within their community and/or globally in the last year. These achievements should revolve around their results, potential for growth plus the ability to inspire other young people in Africa.

For more information and to nominate a candidate, visit www.thefutureafrica.com/awards, e-mail [email protected] or send an SMS to +2348022226712. Nominations close September 2015.

The award categories for 2015 are: