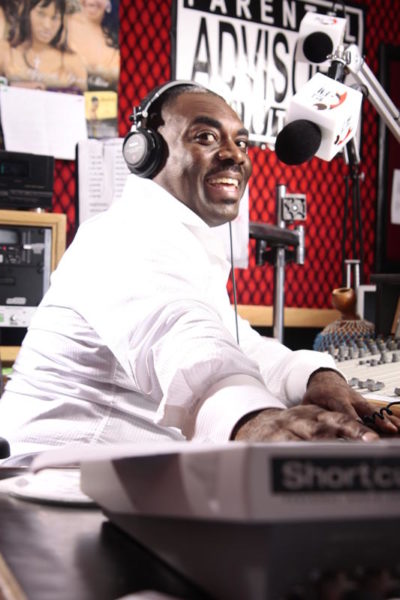 Chaz B‘s wife is devastated. Chinyere Roselin Chukuma has asked the Medical and Dental Council of Nigeria (MDCN) to investigate doctors in the employ of the hospital where he husband died.

It has been a very difficult 11 months for she and their daughter since the passing of her husband and now, the popular broadcaster of “Sharing Life Issues” fame is speaking out and trying to get answers.

In a petition presented before the MDCN, she accused the hospital of negligence, and urged “the Investigation Panel to investigate the doctors in the employment of St. Nicholas Hospital and find out if there has not been a case of incompetence and gross negligence made out against them.”

According to the Guardian Newspaper, the petition titled “Affidavit of Gross Negligence of Doctors of Saint Nicholas Hospital in Lagos in the Medical Case of Late Mr. Charles Bruce Chukuma” was deposed to as an affidavit before the High Court of Lagos State by Mrs Chukuma and filed by Olaolu Osanyin, the medical lawyer representing Chukuma’s family and estate.

Below is her account of what happened as outlined in the affidavit and shared with online publications including the Guardian Newspaper and Sahara Reporters.

***
My husband called me at about 6:40 AM, Friday the 21st of November 2014, from work. He asked me to come and pick him up, that he was not feeling too good. I left with the driver to get him. When I got there, he was too uncomfortable, and he asked me to take him home. But on our way home, I noticed that he was in pains, so I asked the driver to reverse the car and head instead to the hospital (St. Nicholas Hospital in Lagos).

On reaching there, we met, the receptionist. I asked if there was a Doctor around. This was around 7 PM. She said yes and after some time we were asked to go into Room 2. Right there we met a young Doctor called Dr. A. He asked a few questions that I answered while my husband was wallowing in pains. He (Dr A) opened an emergency file because according to him, my husband’s file was locked up in Dr. B’s office, and no one has access to that office. I told Dr. A that my husband had incisional hernia surgery done a few months back at the same hospital, August to be precise and it was performed by one Dr. C an India man, and Dr. D at St. Nicholas Hospital. He started to examine him. He then left us in his office and said he was coming back.

He came back after some minutes and said he was trying to reach Dr. D from the reception, but he is not getting through. So I used my husband’s phone and dialed Dr. D and got through. At this point, I gave the phone to Dr. A, and he started explaining to Dr. D, what he thought was the problem. Dr. D on the other end asked if my husband was in pains, and Dr A said yes. Dr. A told Dr. D that he was suspecting intestinal obstruction. Dr. D asked if there was any swelling around where the incision was done, but Dr.A said no. Dr D asked if there was any reddish sign around the same area, and Dr A said no. So Dr. A suggested giving him antibiotics, but Dr D said that they have to be careful what they give him, since he is a post kidney transplant patient. Dr Dasked them to give him a particular injection twice to ease the pains, and he said that they should observe him till the next morning. So I left to go get him what he had asked for (his tea and his stockings). On my way around Bonny Camp, I got a call from a strange number, when I picked up; it was Dr. A, on the other end. He asked me to turn back to come pick up my husband, and I asked why?

He (Dr A) said that my Husband is feeling much better, and wants to go home. I asked the driver to reverse and head back to the hospital. And on getting there, I went in and asked the Dr. again why he wants me to take him home. He repeated once again that he feels much better and I asked Dr A if he was asking me to take him home because he thinks he feels better or that the hospital doesn’t have a bed for him. I asked this because the nurse had mentioned earlier that she needed to check for bed space. Dr A at this point told me that my Husband would be fine, he asked me to take my Husband home and bring him the following morning. Meanwhile, before then, Dr A wrote a prescription of drugs for my husband which I took to the pharmacist and when the lady there saw it, she asked which Dr. I saw. I told her that it was Dr. A. She moved over to the other side and called the Dr’s office. They both argued about the drug that he wrote, she then gave me just1 tablet of Exforge. When my husband got up from the hospital bed, he staggered and I held him and asked if he’s fine. The Dr. said that it’s the injection that was given to him that he would be fine. So I took him home.

We got home. And just about 15minutes after, my husband said he felt like throwing up. I brought a bowl to him, and he vomited, and he felt a bit better. He slept for some time and got up in excruciating pain.
Immediately I jumped into my clothes and then called Dr. D, to say that we are on our way back to the hospital. He said no problem that the doctor will be waiting for me. I asked, which doctor? And he said the doctor is their senior surgeon by the name Dr. Z. Dr D said that Dr. Z was the doctor on call. We got to the hospital in less than 20 minutes; my husband came down from the car himself. He walked into the hospital by himself before he was wheeled into the ER. Then came Dr. A, and I asked him about the senior surgeon, and he told me that he would be coming very soon. I wasn’t too happy with that, as I had mentioned to Dr. D that my husband was in serious pains. I expected to see a consultant like he said. Dr A started by
trying to put him on a drip that took forever, as he was unable to successfully get his veins while my husband was languishing in pain.

My husband kept telling them (Dr. A and the nurse) that he wants to throw up or use the restroom, and he would be fine. He kept saying that if he throws up he will be fine. Meanwhile, Dr. A was taking instructions on the phone from Dr. Z. This was when I asked when the Dr. would come. I kept asking, “when will the doctor come?” And Dr. A said Dr. Z asked him to get my entire husband’s information. Dr. A told me that they are waiting for the Radiologist and the Anaesthesiologist, and none of these people showed up.

My husband kept on saying that he wants to throw up. But then, Dr. A asked the nurse to give him an injection, I asked what the injection was for? And he said it will stop him from vomiting. He became so uncomfortable and was losing his breath. They put him on oxygen, but I guess he was already choking.

Meanwhile, Dr A was still taking instructions from Dr. Z on the phone. At this time, he started gasping for air. Meanwhile, before then, another doctor showed up. I don’t know his name, but he’s average in height and dark complexioned. He inserted a suction tube into his mouth, but I guess he was two hours or more late with that. Because if that was done when I brought him to the hospital that morning, he would have been here with me today.

If Dr. Z were at the hospital, even after he was told that it was an emergency; my husband would have been here with me. If the anesthesiologist was at the hospital, he probably would have been here with me. If the radiologist were around on that morning to at least see what was happening inside of him, he probably would have been here with me. If Dr. A knew exactly what he was doing that morning without taking instructions from Dr. Z on the phone, with an emergency case right in front of him, my husband would have been here. My husband died of total negligence on the part of St. Nicholas Hospital, and I know it. Like I said earlier, the doctor was 2 hours plus late with the suction, because, at this time, the nurse was already calling my husband’s name, shouting “Mr. Charles, Mr. Charles!” He was given four adrenaline injections. The drip wasn’t going at all, all this while lest I forget. I watched my husband struggled to breath. I watched him fight for his life, and I was right there when he died. And even though they were busy with CPR, I knew when he passed on because immediately he stopped struggling, fluid started gushing out of his mouth and nose, I knew that was it. That was the same fluid that was choking him. If there were a senior consultant or surgeon at the hospital as at when I brought him, he probably, would have been helped. In between all this, Dr. A at a time said to Dr. Z on the phone that he should come now as the patient is in a critical condition. He said to the same Dr. Z that 11 O’clock might be too
late. I brought my husband at about 6 AM to St. Nicholas Hospital and he died at about 9.30AM without receiving prompt and adequate care.

Human life cannot continue to be lost so cheaply in Nigerian Hospital, people must be made to account for their actions as professionals hence I have contacted my Lawyers to investigate the cause of death as he has died with our dreams, aspirations, and vision and planned future together.

Hospital’s Response
When contacted, St. Nicholas Clinical Director, Dr Ebun Bamgboye, told The Guardian that the hospital did not do anything wrong during the treatment of the late broadcaster.

Bamgboye said: “Like she (Chukuma’s wife) mentioned, she has taken the case to MDCN. Ideally, it will be pre-judicial of us to go ahead and discuss the case. Of course, we did not do anything wrong. But it will be wrong for me to start discussing the details of the case. And I think pending when it is reported that the case has been investigated, it will be unfair for anybody to pass any judgment. MDCN has asked for our comment, and we have responded. When they call us during trial, we will state our part of what transpired.”

Do You Know Buhari’s Nickname for Babangida? Find Out!

A 171.32Billion Naira Loss…This Financial Analysts’ report on Oando has Everyone Talking