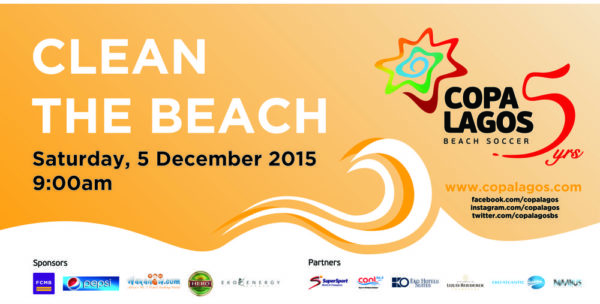 As part of activities to herald the 2015 edition of Copa Lagos, the flagship International beach soccer festival in Nigeria, the organizers have announced it’s annual Clean The Beach event scheduled for the 5th of December 2015.

Clean The Beach is an initiative of Kinetic Sports Management. The event attracts celebrities, celebrated local and international sports stars and corporate executives who come together with other beach soccer enthusiasts to gather garbage and other waste material from a selected beach within Lagos.

Its official sponsors include FCMB, Pepsi, Hero, Eko Energy Estate and Louis Roederer with Wakanow as its travel partner, Super Sports and Cool FM as its Media partners and Eko Hotel and Suites as its hospitality partner.