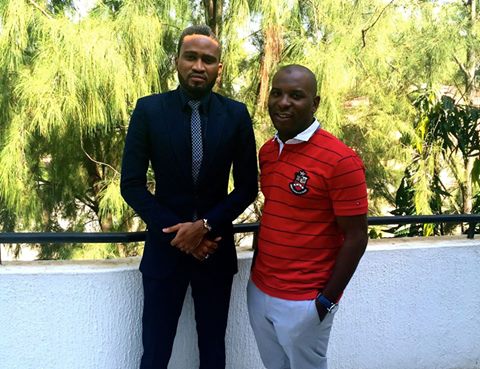 Mustapha (in red) with Ohimai

The man facing major allegations is speaking out for the first time. Ever since Sugabelly‘s harrowing story of abuse, rape and manipulation broke, there has been no official word from the other side.

In this exclusive interview, Publisher of SIGNAL, Ohimai Amaize and Editor of SIGNAL, Yemi Adebowale which took place in Asokoro, he tells his side of the story.

You can read the entire interview on the SignalNG site HERE.

In the interview, he confirmed a brief relationship with Sugabelly which he claims began after she turned 18 years old. He also denied all rape claims. Read below and click HERE to read email communication reference in the interview.

Who is ‘Sugabelly’ to you?
Lotanna (Editor’s Note: It is BN’s policy not to reveal names of rape victims unless they waive anonymity which Sugabelly did via her blogpost on the incidents) as her real name is called, is someone who we were colleagues together while I was serving at an IT firm in Abuja called Alteq. She was a staff at Alteq. We were colleagues for a while and at some point we dated for about two months. I came back to Nigeria in 2006, and it was at Alteq I first met her. I’m not sure how long she had worked there before I came to the company for my NYSC. It was a long time ago. I was about 24 then. We talked like every other person. There was a time she had a party for the office, I thought it was a party for the office but it was her birthday party, her 18th birthday party. It was in March of that year. I didn’t go for it. I usually don’t go to office parties. I had another business. I was working at my company and at the IT firm as well. So one day at the office she came to me and harassed me that I missed her party and I said, oh, don’t worry I will make it up to you. I will take you out for sharwarma and I took her to 212; then they used to sell sharwarma. This was the first time I took her out. There are emails to corroborate this. From then on we started talking. She was a very interesting personality. She is very brilliant and she reads a lot of books. I read a lot of books too and I don’t meet people who read a lot of book. I used to read a lot of fantasy books. All these Game of Thrones people are watching as movies now, I read them as books like ten years ago. Knights of Shallaman, Wheel of Time, Lord of the Rings, Inheritance Cycle, many many books I read years ago and there were very few people who knew these things. She was one of them. She read a lot and she wrote. She was a very brilliant writer; in fact, I think that was why she was working as someone’s secretary at the office. She used to write a lot of letters for the company. Claims have emerged from her that as at January of 2007 I was in a relationship with her and doing all sorts of wicked things to her. Just like now, in December, precisely December 17, 2006, I lost my mum. I was in the UK. I watched my mum die. I loved my mum. I brought her body back to Nigeria, so just like now I was going through a period of grief. So it wasn’t possible all the things she is claiming that I did. I would be mourning.

How long did your relationship (affair) with her last?
Our relationship lasted like a month and a half. Not even up to two months. I found out she was sleeping with my friends. She slept with a couple of my friends. I discovered and told her about it. She told me she loved me, she wanted to marry me and was madly and deeply in love with me. And I told her it’s not possible, we can’t get married because I am not at the stage where I wanted to be married. And you’ve had something to do with my friends, so the relationship ended. While we were in the relationship, she had told me things about her mum, that she hated her mum, her mum wasn’t there for her and stuff like that. She sent me an email once making reference to her having visions of violent rape the first time that we had something physically. She said she had visions of violent rape from a past memory and that we weren’t close enough for her to tell me the details. On one occasion then when we spoke on the phone, she said I shouldn’t abandon her, and then she told me that her mum’s boyfriend raped her. She said a lot of negative things about her mum. This was part of the reason I didn’t want to release these emails to protect her.

But the main reason I am doing this is because I got a call today, someone told me that her friends disclosed that she’s being planning this for while, she is actually writing a book and planning to finish a book, she wants to start an NGO, she wants to appeal to the US government about surviving rape in Africa and she wants to use my family, because of my family’s political name to get traction. I heard she is getting influential people involved, I hear she has involved the lady behind the Bring Back Our Girls campaign, Dr. Oby Ezekwesili. Dr. Ezekwesili reminds me of my mum. She reminds me of someone who should have been my mum and if someone said something about your son, you shouldn’t immediately go to the world and say “Oh, you are this or that.” At least call your son, hear him out. And this is not even about me wanting to say anything to defend myself.

Please read the communication between me and this girl. Everytime I sent her a message, it was always about “How are you doing? Hope you are doing okay? Don’t be too nasty in college. But I know you are very smart and you will do well.” Even in the emails, I mentioned that I encouraged her. She even sent me a message on Facebook apologizing for flirting with my friends, how she loves me and I told her, it’s okay. It’s not the end of the world. And now, people are saying I’m such a beast and I’m such a monster. You didn’t even talk to me. You didn’t even ask me… These things are so horrific. What kind of person can actually do these things? Not only did I do that and I did it with my younger brother that was just 15 back then? I did that with my older brother who was about 30 years old then? And this older brother is not my immediate older brother. He is two brothers ahead of me. Then my cousin? Then my friends? Then the Nigeria Police Force? This is such a movie.

How is your family reacting to this?
Of course it’s very hard. We are mourning. She’s been releasing these this for a while. She’s been doing this for a while but my family has kept quiet all along because we know the truth. Yes, some of my family members are really shaken right now. We are grieving. I have just been orphaned. I loved my dad. My dad is a hero. Anybody from Kogi State knows that. Look at his burial. How many people have received his burial? Look at the whole country? If we were such wicked people, if my dad was a monster, would people react? There was a rumour that my dad had risen. If you saw the people the way they were praying and rejoicing. And now this girl has used this unfortunate incident to capitalize in painting my family as evil…

How long have you been married?
I have been married for like six years now. I got married December 15, 2009. And that was when my problem with her really started; when she found out I got married.

Have you ever raped anyone?
Come on, why would I do that? It doesn’t make any sense whatsoever. I can never and will never support such heinous act. Come on! It’s not even a question you ask a normal person. It’s like asking, have you committed murder before? Because it’s such an inhuman thing! And I understand why people would do this and she’s brilliant. Because she knows human beings are emotional and sentimental. Play on their intelligence. Play on the fact that women have been raped before and for us men, we hardly speak up. I am not saying men are angels. I’m not saying I am an angel. But I have never raped anyone in my life before. I am happily married. I have three little daughters. I can’t even imagine it. God!

You know what? I am going to step out for those who have been accused falsely. There are a lot of people who have been falsely accused. You know, because of my last name, I am fortunate to have the opportunity to speak up. You see, people don’t even need to hear me speak. Just read the conversation I had with this lady and you can read her blog. It’s just a blog. You can compare the two. In my email conversations with her, you can tell that I have genuine feelings for her and she has genuine feelings for me. We are communicating as human beings. Then you read this blog and it’s something else. In her mails to me, you will read her asking about me, my brothers, my friends, my cousins, telling me how she knows that I’m so hardworking and that I’m a good person. I don’t understand how that translates to a blog that says I was such a terrorist.

What do you think she wants from you?
It’s fame. It’s simple. Fame. She has skills and in her heart, she’s found out that you know what? My blog isn’t really getting a lot of traction, I’ve been working on this story, I’ve been writing a book, so let me put out this story first. First, she got some Twitter people to put it up, when that didn’t get as much traction, she resorted to this. That was the groundwork for this. Now she has put this on her blog and everybody is going to her blog, she is about to launch a book on surviving rape in Africa; all of this is some sort of elaborate plan to make money and fame to the detriment of someone who hasn’t done anything to her. Whatever it is that’s bothering her, I think her mum should speak to her. Her mum honestly needs to speak to her. Her being in the US and being away might not be the best solution. She should actually have a sit down. What is bothering her? She told me she hates her mum, that her mum’s boyfriend raped her. Let her talk to her mum about that.