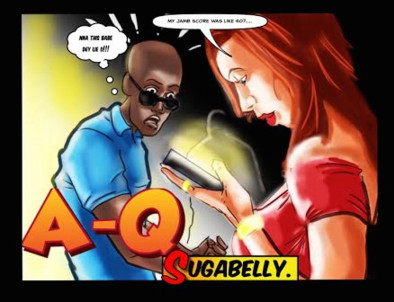 Rapper A-Q has released a track titled “Sugabelly“. The song describes a scenario where a guy meets a girl named Aisha who tells outrageous lies such as “I school in the UK but I live in Dubai so I take flights every day from Dubai just to attend lectures“

As the story in the song unfolds, the girl eventually comes over to the guy’s house and then she ate Pizza “which was like a sedative…then I had her face down, hips up, hit her with the D until I split her ribs….”

He later gists his friend that he used “2-5 cab, 3k pizza, I use do the girl last night, I comot all my money from the girl body sha” and his friend responds, “Bad Guy…”

The rapper is currently relishing the attention by retweeting positive responses to the track as well as promoting his album.

As expected the Twittersphere is presently reacting to the track.

Mercy Johnson is Now a Mum of 3! Superstar & Hubby welcome a Baby Girl