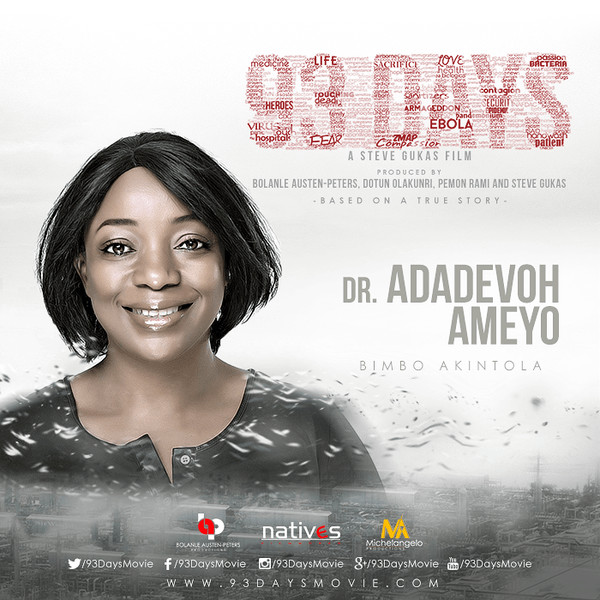 It was revealed this week that the family of Ebola hero Dr Ameyo Stella Adadevoh‘s family was opposed to the upcoming “93 Days” film and are currently considering legal action – Read Here.

The producers of the movie have now responded.

We hereby categorically and strongly deny all the allegations contained in the recent press statement released by one Dr Ama Adadevoh, who claims to be acting on behalf of the Cardoso and Adadevoh families. The said allegations are not only untrue they are malicious and scurrilous and a calculated attempt to sabotage our feature film, “93 Days”.

93 Days is not the biopic of any one individual and has never claimed to be the story of Doctor Stella Adadevoh. Whilst that in itself is a strong story, we found it more compelling to tell a story that celebrates many of the heroes of the fight against Ebola. These include the doctors, nurses and staff of First Consultant’s Hospital, the employees of the Lagos and Federal Ministries of Health, corporate and individual Nigerians who rose to the challenge of fighting the scourge as well as the WHO team that came in to help at the risk of personal injury and even death.

For us, this presented a more universal story of human courage, dedication and sacrifice that may inspire our great country and its people. Ours is a pride story that shows Nigeria at one of its finest hours and casts our country in a positive light around the world. To ensure the universal appeal of the film we enlisted, at great cost, Nigerian and International actors to feature in the film. Amongst these were Danny Glover, Keppy Ekpeyong and Bimbo Akintola.

We want to state plainly that we do not require anyone’s consent to make the film as we have a constitutionally guaranteed right to freedom of speech and expression. Besides, the matters portrayed in the film were derived from facts that are well within the public domain and those facts which were not already publicly known were provided to us by those privy to the said facts. For instance, we obtained additional information from interviews with the survivors of those who lost loved ones, volunteer doctors and nurses as well as officials of the Lagos State Ministry of Health.

To honor those protagonists of the Ebola story it was essential for us that the film be, as much as possible, an accurate, genuine and sincere record of the facts relating to the country’s efforts to fight the disease. In fact, that was the only way of doing justice to those brave individuals (and foreigners) who had given so much in the service of the country.

To this end and contrary to the allegations contained in the press statement released by Dr Ama Adadevoh, we enlisted the help of the Adadevoh and Cardoso families from day one. They gave their comments on the script and their amendments were incorporated into the final script. Further, the late Stella Adadevoh’s son, Bankole Cardoso, consented to the making of the film and to being portrayed in the film. Not only did he consent, he was kind enough to provide us with information concerning his late mother’s actions during those trying times. The facts provided by him proved useful in the development of the script and we have his interview on film should anyone require further proof. In essence, the story of Dr Stella Adadevoh depicted in the film was obtained partly from facts provided to us by the Adadevoh and Cardoso families and more importantly by her son, Bankole Cardoso.

We are aware that Dr Ama Adadevoh and certain elements within the family are involved in another film project on the Ebola story and are attempting to derail our film in the misguided belief that to do so would ensure the success of their film. It is plainly wrong for these people to try and monopolize the Ebola story exclusively for themselves by trying to prevent the making and release of a film that so many of the people concerned have supported and contributed to.

Our film features many of the people who were in the vanguard of the fight against the terrible disease. Many of these people lost loved ones and made other sacrifices still unknown to a majority of Nigerians. They have supported the film and want their story told and it is only fair that their stories are told.

In light of this, we fully intend to tell their story! In doing so we refuse to be bullied or cowed by empty, petty and ridiculous threats based on false and trumped up allegations.

You can Now Watch NETFLIX in Nigeria