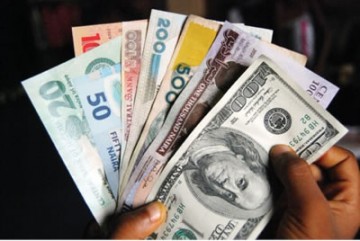 The Nigerian Naira is on a free fall in the parallel market, while official interbank rates remain stable.

According to Vanguard, the demand for dollars to pay for Chinese goods is part of the reason for the latest decline.

According to a BDC operator who spoke on condition of anonymity, “You know China had been on its one month annual holidays. But they resumed work on Monday, and people have to complete payment for goods ordered before the holidays.

They had made 30% down payment to order the goods and they now have to pay the 70% balance otherwise they will lose the 30%.

That is why they are desperate and ready to buy dollars at any rate. Meanwhile supply is scarce and those who have dollars are not willing to sell because they might also need the currency soon”.

The newspaper traces the beginning of the rapid fall of the Nigerian Naira to when the Central Bank of Nigeria stopped the weekly sale to Bureau de Changes with dollars on January 12th, 2016.

The interbank rates remain the same at ₦199.34 for Dollars.

With school fees and medical bills suspended from the list of official forex last week, the demand on the dollars and pounds in the parallel market is undoubtedly set to increase.

BN Bargains: Get 15% off Designer Opticals at House of Lunettes | Up to 20% Off Outdoor Advertising in DU Opensource’s #DULovePromo