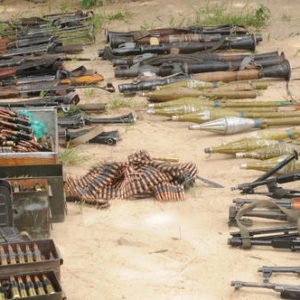 The Nigerian Army has said its troops of 81 Battalion and 251 Task Force Battalion of 25 Task Force Brigade, 7 Division have cleared Boko Haram terrorists’ “spiritual power base” at the Alagarno forest, Borno State.

This was made known in a statement signed by the Acting Director Army Public Relations, Colonel Sani Kukasheka Usman.

The statement announced the clearance of several Boko Haram hideouts in some villages as well as the rescue of 63 individuals who were kidnapped by the terrorist group.

The statement reads in part,

Also in Algarno forest the Army destroyed their logistics base and recovered 31 motorcycles, assorted foodstuffs, a donkey and a pick up van, AK-45 rifle with registration number 17714 a Dane gun, 2 boxes of 7.62mm ammunition, 4 loaded magazines of AK-47 rifles and 2 magazines pack.