We always look forward to the AMVCAs – it is arguably one of the biggest awards ceremonies that unites Africa’s creative force like nothing else. It is also an opportunity to reward not just actors and actresses, but also the people who put so much work into making those movies we all love.

This year, the inaugural edition of the Africa Magic Viewers’ Choice Awards held on Saturday 5th March 2016 at the Eko Hotel & Suites. It was also televised live on all Africa Magic channels.

BellaNaija Style was there to cover all the fashionable moments from the event. Till we bring you the BN Red Carpet Fab post, see who made our best dressed list.

Osas and Gbenro Ajibade were picture perfect together at the AMVCAs. Osas was a vision in her pink strapless Toju Fojeh ball gown while Gbenro looked extra dapper in his blue Bosi & Charles ensemble. 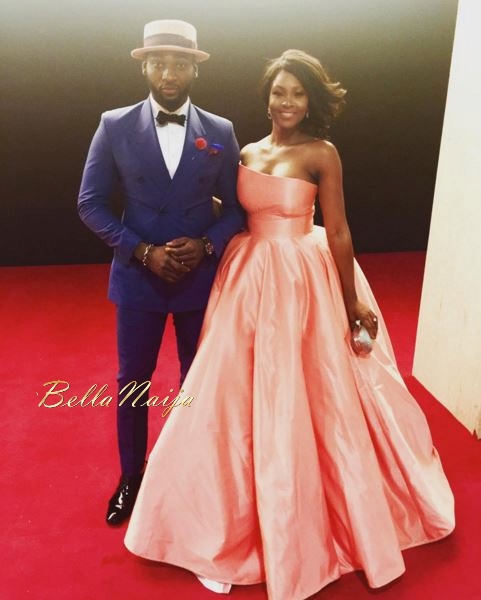 Osas’ gown accentuated all her best features and she looked every inch like a beauty queen. She kept the rest of her look simple and accessorized with a silver clutch and a pair of black and silver earrings. Her makeup, done by Doranne Beauty, was also simple with a minimalist approach.

It has been a minute that we’ve seen uber-sexy couple Damilola and Chris Attoh on the red carpet. Chris Attoh was presenting an award at the AMVCAs this year and his super sexy wife Damilola came to support him. Chris Attoh went bold with a mustard coloured blazer

Damilola kept things simple but still oozed glamour as she stepped out in a high-neck velvety print dress which featured a thigh slit. She accessorized with T-strap sandals and a black/gold box clutch. We like how she ditched the conventional red carpet hair and went with a full head of curls.

Another sexy couple that walked the red carpet at the AMVCAs was Ik and Sonia Ogbonna. Interestingly, Ik Ogbonna and Chris Attoh (above) had an almost identical look of mustard blazer, black bowtie, black pants and a black pair of shoes. For Ik, he added an extra accessory with a red brooch.

His wife, Sonia, rocked a Beyonce-inspired look, made by Fablane by Derin, for the awards. She went with a white lacy number that showed off some skin with sheer inserts.

At this year’s AMVCAs Stephanie Linus made her debut red carpet appearance following the birth of her son four months ago. 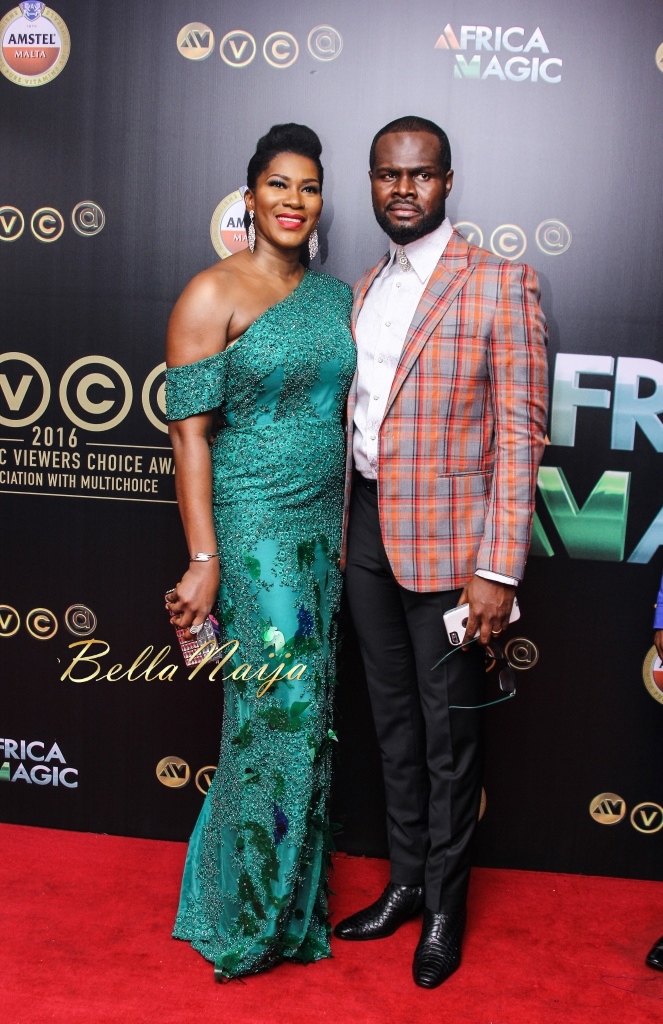 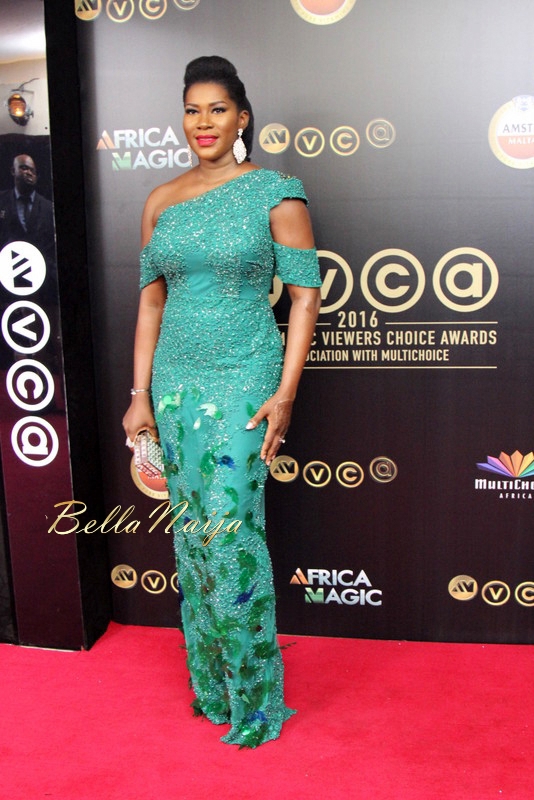 The Nollywood actress was joined on the red carpet by her husband Linus Idahosa and they simply complemented each other in the best way – Stephanie in her custom Lisa Folawiyo Studio green bedazzled dress with exquisite butterfly details and Linus with his plaid blazer.

Our Nigerian mothers are so hot. Another yummy mummy spotted on the red carpet was actress Dakore Akande. We love how colourful and vibrant her outfit was. The actress walked the red carpet with her dapper husband Olu Akande and they made such a striking couple.

Styled by Rhoda Ebun, she rocked a gorgeous dress by Funke Adepoju and accessorized with a pair of shoes from VR by Mobos and jewelry by Zoyas Jewels.

Nollywood actress Mercy Aigbe-Gentry was unarguably and undoubtedly THE best dressed lady on the red carpet at the AMVCAs. From her hair to her makeup and to her studding silver beaded dress by House of Luminee, the mother of 2 came to slay – and slay she did!

Yummy mummy Anna Banner Ebiere made a surprise appearance at the AMVCAs and we loved her outfit – as did our BN readers. Styled by Moses Ebite of MoAshy styling, she rocked a Tarik Ediz blue dress that had a lacy top and a train detail. Anna Ebiere accessorized with a BCBG clutch, Jimmy Choo shoes and her makeup was done by Dave Sucre.

We were really looking out for Genevieve Nnaji‘s outfit for the 2016 AMVCAs after she blew us all away last year.

This year the actress rocked a custom piece from Tope FnR. It was a simple yet stunning dress which featured a cowl backline. Genevieve was styled by Veronica Odeka with hair by Debola Falana of Dfalana Artistry.

Lilian Esoro-Franklin is rocking her maternity style so well. 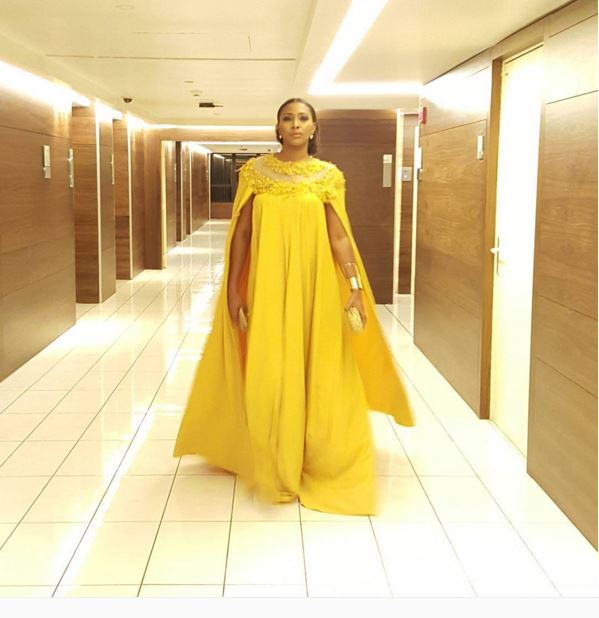 Yummy mummy to be Lilian Esoro looked gorgeous in her yellow cape dress from House of Dorothy Bridals and according to the designer there were Swarovski crystals on the dress. Talk about going all out! It was definitely a look we’d remember for a while.

Red carpet host for the night, Eku Edewor was styled by Bubu Ogisi is a simple and gorgeous piece from Tsemaye Binite. We love how the sleeves just seem to fall off her shoulders. 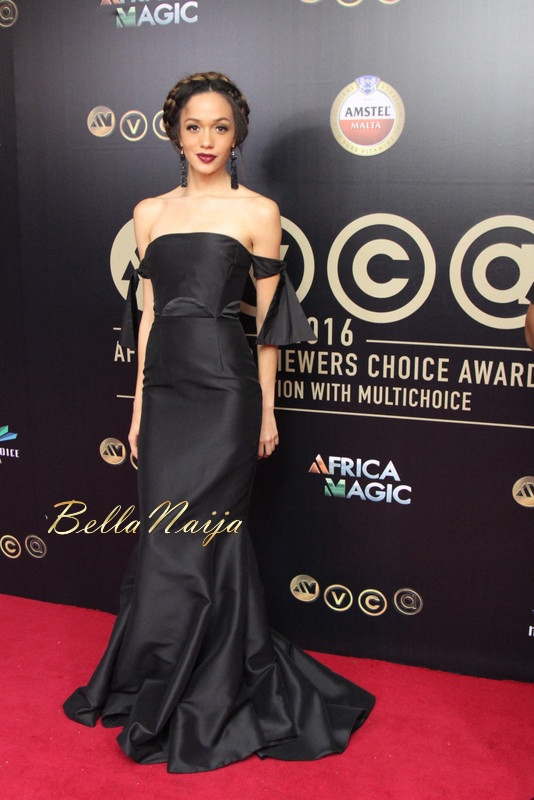 Her makeup was done by Debola Falana and hair by Lewa Studios.

Nollywood veteran Ego Boyo brought her A-game to the AMVCAs. She was gorgeous in a piece from House of Deola. 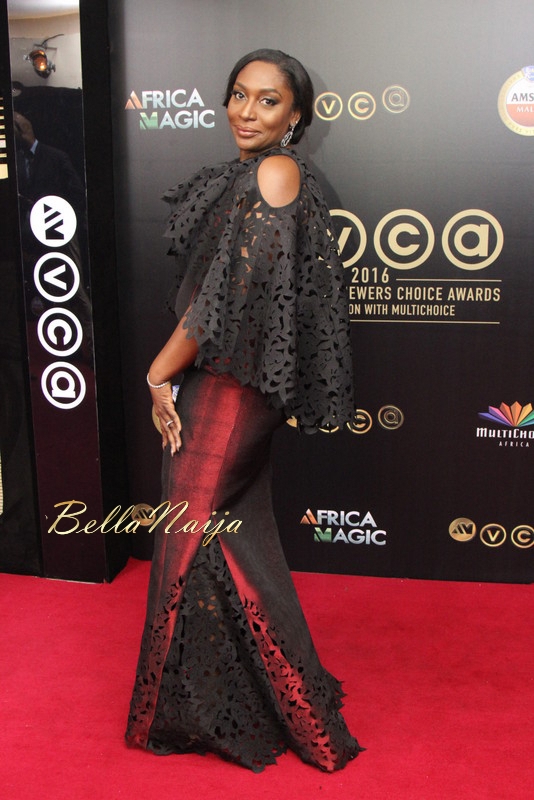 Caroline Danjuma showed off her killer body on the red carpet at the AMVCAs. She rocked a custom nude Bunmi “Million” dress and she had her hair packed up in a big bun.

Nollywood actress Adesua Etomi won the award for “Best Actress” last night at the AMVCAs and she also wins a spot on our Best Dressed list.

Styled in a custom vibrant green dress from April by Kunbi, she looked every inch a princess especially with the back of her dress which featured a giant bow.

While a number of people felt Nollywood actress Ini Edo‘s outfit was a bit OTT, it lands a spot on our Best Dressed list.

The white “bridal” piece features a lace insert in front and on the sleeves while the back of the dress features a very long train.

Co-host of the show was South African TV personality Minnie Dhlamini who is known for her red carpet slayage.

She walked the red carpet in a custom piece from South African designer Gert Johan Coetzee and she killed it. We absolutely love the shoulder detail as well as the detail on the train.

Music star Yemi Alade was one of the performers at the AMVCAs last night and she walked the red carpet a couple of hours before her performance.

She rocked a multi-colour custom piece by Iconic Invanity and she was styled by House of Tangerine. We love how her outfit embraces so much colour but is still so simply and classy.

Kemi Adetiba went with an unconventional look last night as the film director rocked a 3-piece suit from Mai Atafo.

It was bold, creative and a nice change from the dresses.

Green was definitely the colour of the night, last night, and this year it was Nollywood actress Rita Dominic who rocked a custom piece from Elvira Jude.

She kept her overall look simple opting for minimal jewelry, a black clutch and a pair of silver heeled-sandals. 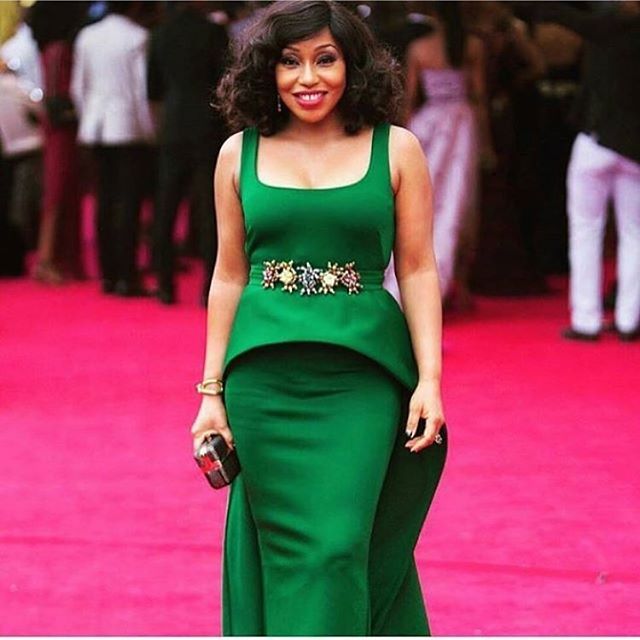 Nollywood actress Rukky Sanda had one of our best outfits fro the night. She rocked a pristine white dress that was accessorized by blue Miu Miu pumps and a blue Bottega Veneta clutch.

Media personality Nancy Isime also had one of the best outfits of the night. Her dress was designed and styled by Erica Moore and her makeup was done by Juliette Okoli of Perfect Visage.

For an African awards show, there weren’t as many African looks as we’d have liked but actor Blossom Chukwujekwu definitely rocked one of our best looks for the night.

He was unapologetically African in his attire for the night complete with cap and beads.

How awesome is it that a musician like Falz won an AMVCA award last night? Pretty awesome is what it is.

He also won on the red carpet in his mustard suit accessorized with a black velvet bow-tie and brown dress shoes.

Actor/Politician Desmond Elliot was also spotted by our BN cam at the AMVCAs. He opted out of the conventional black suit and went with a floral black and white blazer over black pants.

Nollywood legend Richard Mofe-Damijo was a delight to see on the red carpet. He looked so dapper in this 3-piece ensemble. We love how the velvety blue jacket is sharply contrasted by his white shirt and white rose pin. 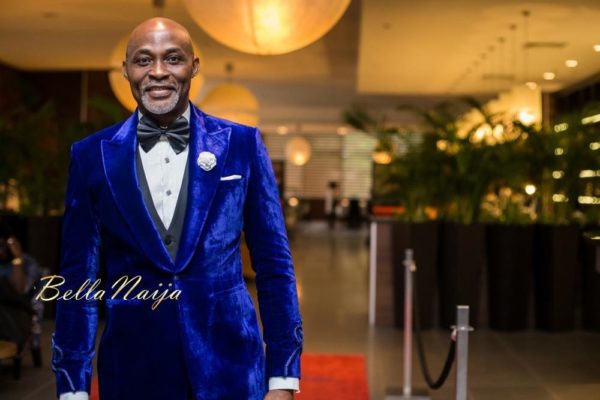 Another spectacular ensemble on the red carpet at the AMVCAs was from Nollywood actor Mike Ezuruonye. He saw stylish in his blue suit. He opted for a pin instead of a conventional tie or bow tie and it made all the difference on the red carpet.

One of the big winners of the night, Daniel K. Daniel, embraced the unusual for his AMVCAs red carpet look. The “Best Actor (Drama)” went with a colourful red floral blazer over a white shirt and black pants.

We were definitely happy to see more men embrace brighter looks this AMVCAs.

Which look is your fave?

All lists in no particular order