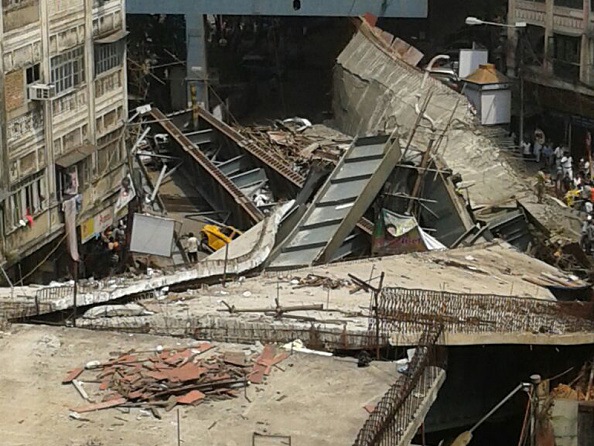 KOLKATA, INDIA – MARCH 31: (EDITORS NOTE: Image was created with a smartphone) A part of flyover collapsed on March 30, 2016 in Kolkata, India. At least two people were killed in Kolkata on Thursday and hundreds were feared trapped when an under-construction flyover collapsed onto traffic moving along the street below, police said. Fire-fighters and residents were trying to rescue those trapped under the wreckage of the metal-and-cement structure that came down near Girish Park in a teeming commercial district. (Photo by Hindustan Times)

A flyover bridge has collapsed in Kolkata, India, killing at least 18 people and leaving 70 others injured.

According to BBC News, the flyover was under construction when it collapsed onto a crowded street on Thursday, in an area near Girish Park, one of Kolkata’s most densely populated neighbourhoods, crushing pedestrians and vehicles under concrete slabs and metals.

While many are still feared trapped under the concrete and steel bridge, it has been confirmed that at least 18 people have died and 70 others are injured from the accident. 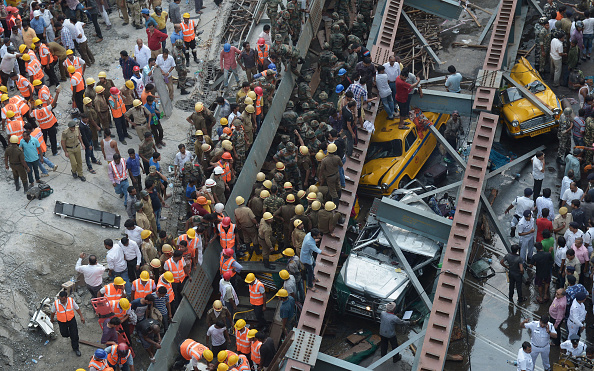 Indian rescue workers and volunteers try to free people trapped under the wreckage of a collapsed fly-over bridge in Kolkata on March 31, 2016.
At least 14 people were killed and dozens more injured when a flyover collapsed in a busy Indian city on March 31, an official said, as emergency workers battled to rescue people trapped under the rubble.
/ AFP / Dibyangshu SARKAR (Photo credit should read DIBYANGSHU SARKAR/AFP/Getty Images)

When attempts by the police and pedestrians to move the fallen girders and steel rods failed, soldiers moved in even as specialist rescue teams armed with concrete cutters, drilling machines, sensors to detect life and sniffer dogs were on their way.

The 2km-long (1.2 mile) flyover has been under construction since 2009 and missed several deadlines for completion.

#IvyPark! Here’s the Beyonce News the #BeyHive has been waiting for ALL DAY!