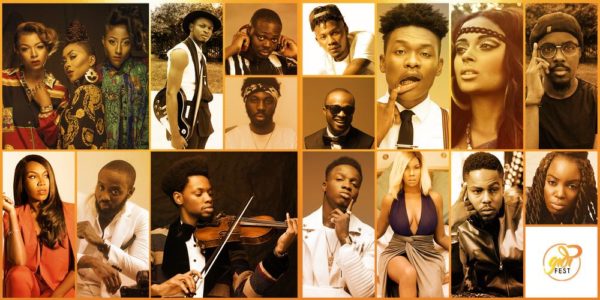 The countdown to Gidi Fest 2016 has begun!

The first and second line-up combine to make Gidi Fest 16 one of the continent’s biggest musical events this year.

During the day, the beach volleyball and football tournaments with celebrity team captains give fans a chance to square off against their favourite stars. The Pepsi sponsored football tournament captains are; BOJ, #NothingtoDoInLagos and OAP Jimmie’s team. The Red Bull sponsored volleyball tournament, consist of Zainab Balogun’s Team, Folu Storms Team, Emma Nyra’s Team and The Fan Team. There is a N50,000 cash prize for tournament winners. Tournaments hold between 1-5pm. During this time Gidi Fest’s DJs will be on the decks to get the party started.

On the food front, Nylah’s Catering is managing Gidi Fest’s African foods court once again. After running out of food due to last year’s high demand, this year’s food court is back, bigger than ever, and will have a great variety of dishes from across the continent.

Curated by creative consultants Indigo Arya and Myles Igwe, the Arts Installation will be the cornerstone of Gidi Fest 16’s art offering. Art lovers and admirers alike will have a chance to view exciting art pieces, photographs and sculptures from across the continent.

BellaNaija is a Media Partner for Gidi Fest 2016