Army Debunks Militants' Allegation on Plot to Take Over Government 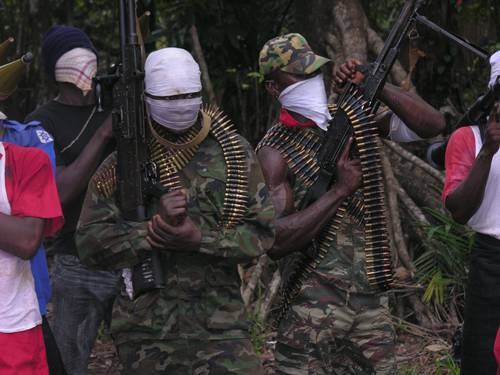 The Nigerian Army has said that the allegation by a militant group Joint Niger Delta Liberation Force (JNDLF) that some of its officers approached it (JNDLF) to continue vandalizing oil installations to serve as an excuse for them to take over the government.

According to Vanguard, the militant group in a statement by its Commander, General Duties, General Atokebe Darikoro said:

Some top military men through their civil agents approached us to cause and continue the vandalization of oil and gas pipelines in the Niger Delta region to serve as an excuse to take over the government from democracy to military rule in the country.

We said no, as such plan is not in conformity with our genuine desire of agitation. The military want to disgrace him now and let him quickly look into the issues and make pronouncement for his administration to be in peace.

Reacting to the report, the Army in a statement signed by the Acting Director Army Public Relations, Colonel Sani Kukasheka Usman, and titled “Warning to Mischief Makers: Nobody is Planning any Coup” said:

The attention of the Nigerian Army has been drawn to another campaign of calumny and distraction by faceless criminal gang of economic saboteurs that hide under the aegis of Joint Niger Delta Liberation Force (JNDLF) alleging that some officers of the Nigerian Army approached them for support to overthrow our duly elected present democratic government.

We also see this speculation as a dangerous distraction to our effort in fighting insurgency and other criminal elements in the country.

The Nigerian Army would like to send a strong and an unequivocal warning to those speculating a coup by the Nigerian Army (NA) against the Government to desist forthwith. We would like state in clear terms that that we are a product of democracy and a focused professional institution and would have nothing to do with such abomination and heinous crime.

We wish to state further that the NA is the greatest beneficiary of democracy and therefore cannot ever contemplate any anti-democratic misadventure, certainly not under the command of the present Chief of Army Staff, Lieutenant General Tukur Yusufu Buratai. Rather, we see this type of dangerous speculation as a declaration of war to destabilise the present government by these unscrupulous elements.

The Nigerian Army is investigating those behind the dangerous insinuation in order to unravel the real motive behind it.

We wish to further assure Nigerians and indeed all peace loving people that the Nigerian Army and indeed its personnel will never be involved in such terrible misadventure.

We wish to further add that no matter how long it takes, we would track and find out those behind these insinuations and bring them to justice.