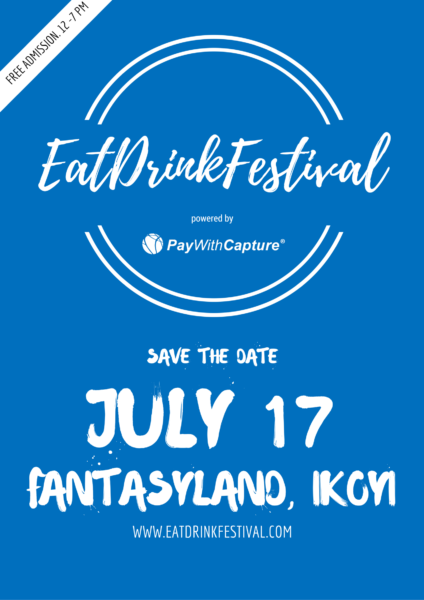 Eat.Drink.Lagos is pleased to announce the second edition of its food festival: #EatDrinkFestival Powered by PayWithCapture.

Recently featured on CNN, Lagos-based food bloggers Folly and Nosa invite the public to partake in an unmatched culinary experience with the city’s finest food vendors. At the one-day festival, guests will be able to eat and drink from an extensive and varied selection of Lagos’ best food vendors.

In its first year as title partner, PayWithCapture will be testing out a new feature – ticketing events via the marketplace.

“#EatDrinkFestival is a free event so you won’t be charged, but we’d also like to know what our users think of this coming on as a full-time feature,” said Demilade Egbeyemi, PayWithCapture Product Manager.

“We love the work that Folly and Nosa do on their blog, and we loved the first #EatDrinkFestival, so this is definitely a partnership we’re very excited about.”

#EatDrinkFestival Powered by PayWithCapture will feature some of the most sought-after food and drink vendors in Lagos, and also present will be Lagos’ feel good hit music station Urban9 6.5 FM. Join us for a day of great food, drinks, and fun.

Media partners for the festival are BellaNaija, Culture Custodian, Guardian Life, Nothing To Do In Lagos, OloriSuperGal, and Urban 96.5 FM.

For more information and to be the first to receive further details, check out www.eatdrinkfestival.com

And the 2016 Three Crowns Mum of the Year is… Nkechi Brayila! See Photos from the Star-Studded Grand Finale