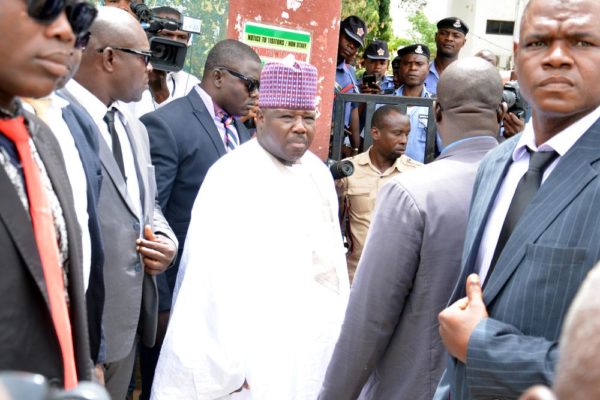 He told newsmen at the party’s national secretariat in Abuja that he would remain in that position until 2018 except he was removed by the court.

Sheriff, who was said to have just returned from a foreign trip, was on Monday denied access into the party’s secretariat by policemen.

He said that he had watched events as they unfolded after the Port Harcourt convention, which he recalled that he suspended in obedience to a court order.

According to him, the court ordered that nobody should be elected into the offices of National Chairman, Secretary and Auditor at the convention.

Sheriff described the Senator Ahmed Makarfi-led National Caretaker Committee constituted at the convention as “omnibus body” saying that it was not in PDP’s Constitution.

“I remain the authentic national chairman of PDP until 2018 unless the court of our land said I should cease to be, which I will obey. But, as of today till 2018, I, Ali Modu Sheriff, is the National Chairman of PDP,” he said.

He said that if Makarfi was interested in becoming the party’s chairman, he should wait for a national convention and contest.

“Ali Modu Sheriff did not want to be chairman; they begged me to be. All of them came to beg me,” he said.

Sheriff disclosed that when policemen stopped him from entering the party’s secretariat in the morning, he went to the Inspector-General of Police, who ordered his men to allow him in.

“Now that the police have handed over the security of the secretariat to the party, I will be coming everyday as the authentic chairman of the party,” he said.

He announced that Senator Hope Uzordima was Chairman, Screening Committee for the party’s primaries for the September 10 governorship election in Edo.

“We have also asked interested candidates to come and buy their forms for the primaries from Tuesday. We are not selling the form for N16 million that people are talking about. We are selling it for N10 million,” Sheriff said.

On the fate of the National Working Committee (NWC) members who handed over to Makarfi, he said that a letter would be written to their deputies to take over if they failed to resume on Tuesday.

“All the deputies are waiting; any NWC member that refuses to resume tomorrow, his deputy will take over.”

Sheriff, who claimed that he was working with every organ of the party, said that he was ready to work with every party member, including Makarfi and his committee members.

The News Agency of Nigeria (NAN) reports that Sheriff was in company with National Secretary of the party, Professor Adewale Oladipo, and a former political aide to former President Goodluck Jonathan, Alhaji Ahmed Gulak.