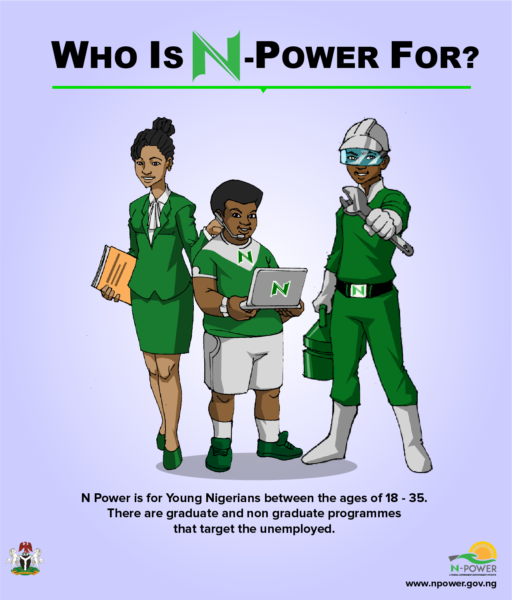 The Jobs portal of the Federal Government, “n-power.gov.ng” has recorded over 403,000 successful registrations, since it opened for submissions on June 12, the Vice Presidential Spokesman, Laolu Akande said on Monday.

Quoting the Job Creation Unit in the Presidency, Akande said: “We have been very impressed by the enthusiastic response to the call for applications. As at noon on Monday June 13, only 36 hours after the launch of the portal, 403,528 applicants have successfully registered on the site and were in the middle of completing the application process.”

The statement was credited to Afolabi Imoukhede, Senior Special Assistant to the President on Job Creation.

“We are also very pleased that the registrations have been taking place without any hitches or system failures, considering the volume of response. All together the website has received over 35 million hits since Saturday midnight,” it said.

The Jobs Scheme, known as “N-Power”, is one of the five initiatives of the Social Investment Programmes of the Federal Government.

N-Power is designed to help young Nigerians acquire and develop life-long skills to become solution providers in their communities and to become players in the domestic and global markets.

It will provide employment opportunities for 500,000 graduates as teachers, agriculture extension advisers, healthcare assistants, and civic and adult education instructors in communities across Nigeria.

There will also be a pool of 100,000 software developers, hardware service professionals, animators, graphic artists, building services professionals, artisans and others.

Applications for the scheme began on Sunday June 12 on the portal: www.npower.gov.ng, and will open for some days, after which screening and shortlisting will be carried out.

President Muhammadu Buhari had in his Democracy Day Speech described the social safety net programme as “by far the most ambitious social protection programme in our history”. About N500 billion was provided for the programme in the 2016 Budget.

The statement noted that the presidency assured Nigerians that the application process would be structurally robust, transparent and fair, while the selection process would also be based on objective criteria devoid of party affiliations.

It added that unemployed Nigerians both graduate and non-graduates will be drawn from across the country on state by state basis in the final analysis.

Related Topics:N Power
Up Next