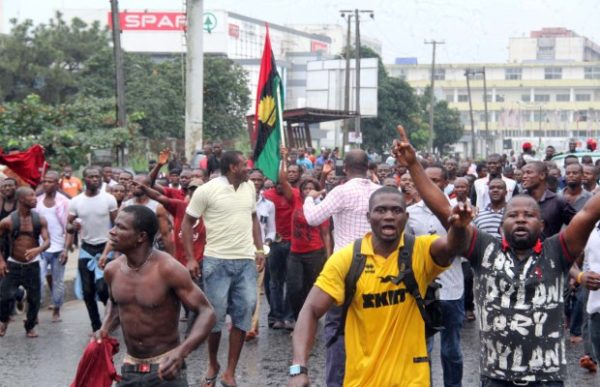 The Nigerian Army has released a statement following the clash between Pro-Biafra activists and security agencies on Monday.

The statement signed by the Deputy Director, Army Public Relations, Colonel Hamza Gambo, said that the security agencies acted in self defence against the agitators who they said created “wide spread panic, tension and apprehension”.

The attention of the general public is hereby drawn to the unwarranted attack that was launched by combined members of the Movement for Actualization of the Sovereign State of Biafra (MASSOB) and the Indigenous Peoples of Biafra (IPOB) against the peace loving populace as well as security agencies at about 0415 hours on 30 May 2016. This attack was purported to have been orchestrated in order to mar the first anniversary of the present democratic government as part of the activities earmarked to celebrate the 50th Anniversary of Biafra. Due to the wide spread panic, tension and apprehension that generated from the activities of the MASSOB and IPOB members, security agencies which comprised of detachment of Nigerian Navy, Nigeria Police, Department of State Service, National Drug Law Enforcement Agency were compelled to intervene in consonance with constitutional provisions of aid to civil authority where and when such occasion demands. The over arching imperative to ensure a reign of peace, security and stability in this circumstance was most starring.

However, the MASSOB/IPOB members who had earlier assembled at a school location on Ataa Road near Saint Edmunds’ Catholic Parish Maryland Nkpor-Agu in Anambra State resorted to fierce attack against the intervening security agencies who were carrying out their legitimate mandate. The nature of this attack involved brazen employment of various types of fire arms and all sorts of crude weapons, volatile cocktail such as acid and dynamites. Instructively, troops of 82 Division Nigerian Army as the lead agency of the security agencies had to invoke the extant Rules of Engagement (ROE) to resort to self defence, protection of the strategic Niger Bridge, prevent re-enforcement of the pro Biafran members apparently surging ahead from the far side of the strategic Niger Bridge at Onitsha. All these efforts were in order to de-escalate the palpable tension as well as ward off the apparent threats to lives and property in the general area.

In the aftermath of the fire fight that ensued, many of own troops sustained varying degrees of injury. These injured troops are currently receiving treatment at own medical centre. Similarly, 5 members of MASSOB/IPOB were killed, 8 wounded while 9 were arrested for due legal actions.

This unfortunate incident notwithstanding, 82 Division Nigerian Army wishes to assure all of its professional commitment to the protection of lives and property of the good people of Anambra State and indeed across its entire Area of Responsibility in tandem with the recent directive of the President and Commander-in-Chief of the Armed Forces of the Federal Republic of Nigeria through the Chief of Defence Staff to the Chief of Army Staff to avert occurrences of such unwarranted and uncivilized attacks against the good and law abiding people of the Federal Republic of Nigeria.

Related Topics:Indigenous Peoples of Biafra (IPOB)Movement for Actualization of the Sovereign State of Biafra (MASSOB)Nigerian Army
Up Next

Give Buhari a “pass mark”, Atiku tells Nigerians + His Recommendations for a Better Nigeria