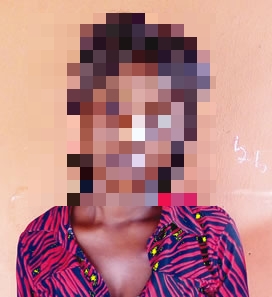 Family members are saying that their 7-year-old son has been in police custody since May 30 2016 over alleged murder.

The Enugu police command took Chibuike, his siblings, and their mother, Nwakaego into custody after Chibuike allegedly shot a 12-year-old boy, Oluebube Boniface, on May 29, 2016.

Nwakaego, who works as a housekeeper for one Edwin Oforma at his residence in the Independence Layout area of Enugu, said that the tragic incident took place when she was in church.

On May 29, while I was away at the Adoration Ministry at Emene in Enugu, for the Sunday church service, my boss’ son, Chukwunanu Oforma, a National Youth Service Corps member, asked my son, Chibuike, and Chibuike’s 10-year-old brother, Ifeanyichukwu, to tidy up a room belonging to his father.

While Ifeanyichukwu swept the room, Chibuike laid the bed. Chibuike found a gun near the bed where he was working, and he took it to Ifeanyichukwu, who asked him to return it.

It was while he was returning the gun that he mistakenly pulled the trigger, releasing a bullet which struck Oluebube, who was in the next compound, on the chest. He died on the spot.

She was called home over the incident, and police officers from the New Haven Police Station removed the corpse and took her and her sons in. The case was then transferred to the State Criminal Investigation Department.

Nwakaego said that Edwin and is his son are yet to be seen since the incident.

According to PUNCH, Nwakaego and her sons, excluding Chibuike were released two days later. She alleged that the police said that Chibuike will only be released when they see her boss, Edwin who is the owner of the gun.

However, the state Police Public Relations Officer, Ebere Amaraizu, told PUNCH on Sunday that the boy “is not in detention”.

Meanwhile a human rights lawyer, Olu Omotayo who works with the Civil Rights Realisation and Advancement Network has filed a petition to the Inspector-General of Police demanding Chibuike’s release and appropriate punishment for police officers involved in his incarceration.

“Nowhere in the world will a seven-year-old boy be detained in police cell for over a month alongside hardened adult criminals,” Omotayo said in the petition also fowarded to the Police Service Commission, the National Human Rights Commission and the Commissioner of Police, Enugu State.