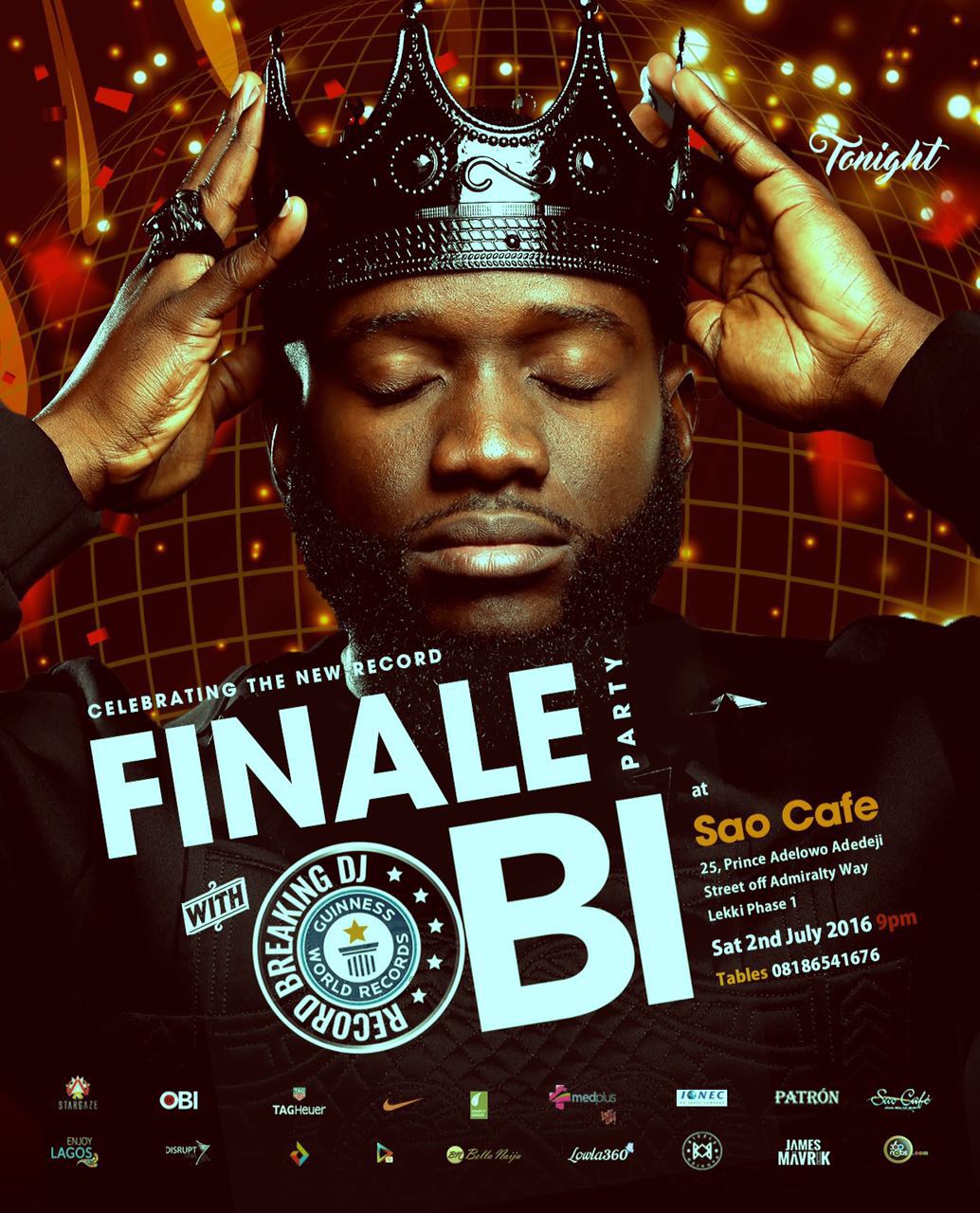 Thanks to the love and support of countless individuals, the news that DJ Obi, one of Nigeria’s most notable DJs, was making an attempt to break the Guinness World Record for Longest Marathon Club DJing spread like wildfire – click here to see when history was made!

We officially announce that after 229 hours and 58 minutes of straight DJing, DJ Obi’s ten-day attempt has come to a close, due to medical advisement, at 1:28pm on Saturday, July 2nd.

Tonight’s world record attempt party will continue as planned from 9pm. Celebrity friends and people who have supported DJ Obi throughout the past ten days will be in attendance as, Nigerian rapper, M.I. performs hosting duties.

DJ Obi has been overjoyed by the love, support, encouragement and prayers he has received in the past ten days. Supporters have showed up by the thousands, and messages have poured in from every corner of the world. It has been a 24 hour party at Sao Café Lagos since last Wednesday! If there is one word we are sure he would want you to leave you with it is, “grateful”.

The fact that Obi made it to this point is proof that anything is possible when one puts their mind to it. He has you to thank for inspiring him to push this far. Nearly 230 hours later and a goal has been achieved!

Team Obi hopes to make an official announcement as soon as possible. Further updates to come as they develop.

Keep up with the world record-breaking attempt on social media:

See videos from the record breaking attempt on YouTube by clicking here!

About DJ Obi
Award winning DJ Obi has worked all over the globe, from Lagos to Los Angeles and everywhere in between. In his nearly decade long career, he has worked on stage with artistes such as Lupe Fiasco, 2face, Lynxxx, Banky W, M.I., Naeto C and countless others. With his extremely diverse music catalogue and concentrated on perfecting his craft, he’s known for his versatile DJing style.

BellaNaija is a Media Partner for #DJObiWorldRecord

Related Topics:#DJObiWorldRecordDJ Obi
Up Next