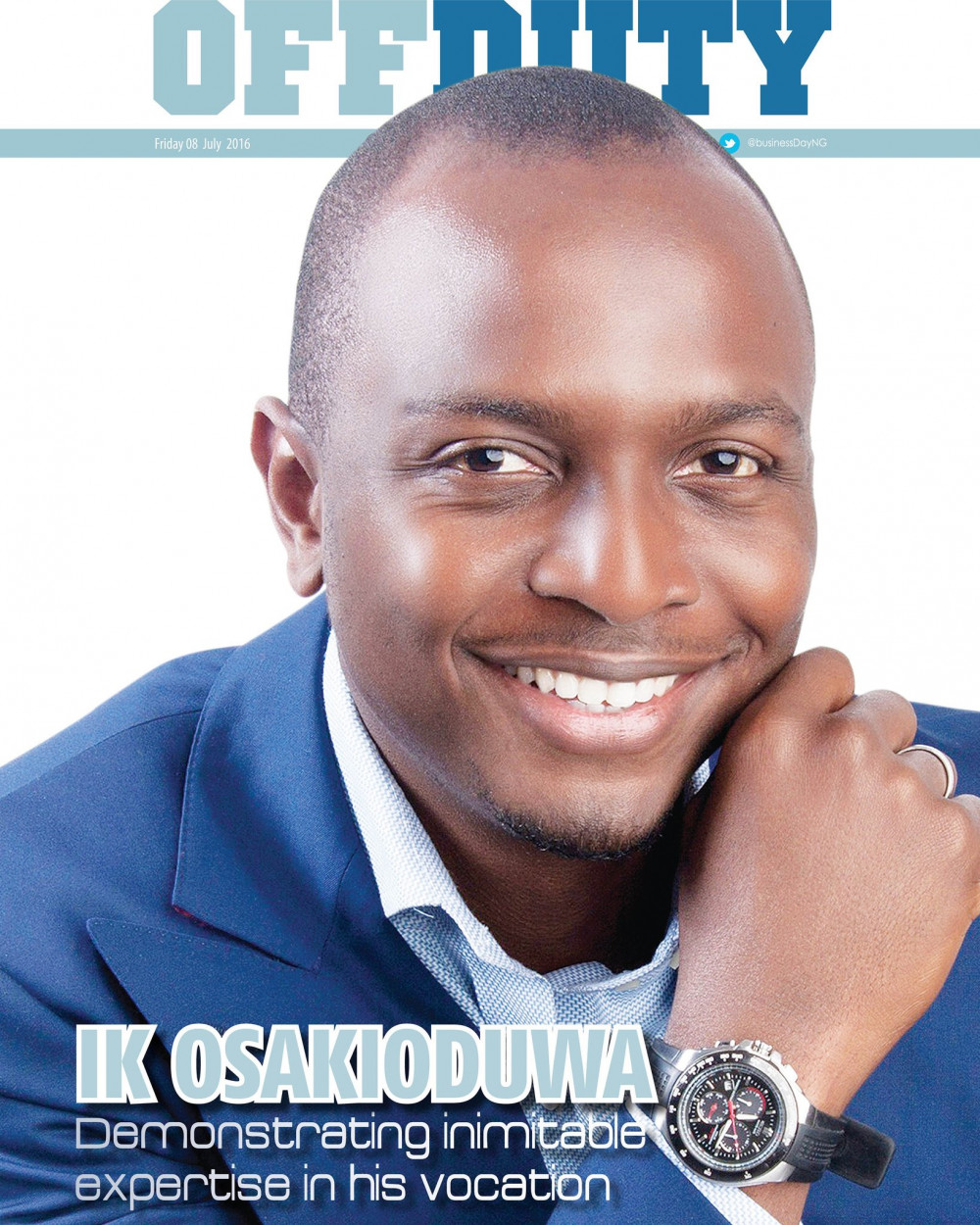 He’s an MC, a TV Host, an OAP but most importantly, he is a father to two Lovely children and husband to the beautiful Olohi.

The charming Ik Osakioduwa speaks to BusinessDay’s Kemi Ajumobi in the latest issue of ‘Off Duty Magazine’.

On Growing up:
My father was in the army so we travelled a lot and changed schools often. One of the effects that had on us was that we grew used to being the new kids in school and making new friends. Also, meeting people from different walks of life teaches you to be very accommodating with cultural and social differences. Bottom-line, you learn to be flexible. In the entertainment industry, that’s a quality that can take you places.

On making a choice between Radio & TV:
Well, I love them both and love them differently. I love the fact that radio is very easy to jump into. I don’t need to dress up at all for it. I’ve actually gone to work in pyjamas on several occasions. You can’t really do that on TV. But having said that, I love the idea of standing on one platform and being live in people’s homes all across Africa. It’s an electrifying feeling. I honestly love both of them.

On his experience so far as ‘Big Brother Africa’ Anchor:
Oh wow! Big brother is still about the Biggest TV show on the continent. It is watched in almost every country on the continent and people absolutely love the show. To stand on that platform and tap into the show’s fan base for 6 years straight definitely helped me grow my brand beyond Nigeria into other African countries. Apart from that, the show is the best teacher you will ever have with dealing with live shows. It has a live studio audience, live viewers at home and you have to take real time instructions while you present the show. Not to mention the fact that you often have auto-cue to deal with, while all of this is going on. I learnt so much about production, presenting and handling pressure working on that show.

On his TV Show – ‘Highlites With Ik’
We started Highlites With Ik in October of 2014. It was a natural progression really to have my own show. I had worked on so many shows with Africa Magic that the channel thought the time had come to develop something around my personality. We deliberated on it for a while and I was tasked by the channel to develop a format for the show. And thus ‘Highlites With Ik’ was born. In the years to come, I plan to develop even more TV Shows that other people can host. Creating content is a passion of mine and I’m never going to stop doing it.

On how lucrative the ‘hustle’ has been:
Interesting question which totally depends on your appetite. In my case, I appreciate all that God has done for me. I know not every person my age enjoys all these things so I definitely feel privileged to have what I have. I am going to say the hustle has been VERY lucrative.

On his personal drive:
The bible says “In all labour there is profit”. I really believe this and I have seen that in my life, whenever I commit my time and effort to focus on something and work hard on it, I enjoy the favour and reward of God. Good things don’t just happen to people. It also takes some work on their part.

On creating time for family:
We are a party family. We all love to travel, watch movies together and play tricks on each other. My wife and son are great at that.

On the Next Big thing:
Well, that used to be Big Brother, Then it was Highlites With Ik and next it was The Voice Nigeria and next it will be… NAH!!! I’m not telling you. At least not until I have achieved it. I will tell you though, that, I plan to create and produce a few other shows that other presenters can host and become celebrated for.

For more on Ik, Grab a copy of today’s BusinessDay Newspaper.