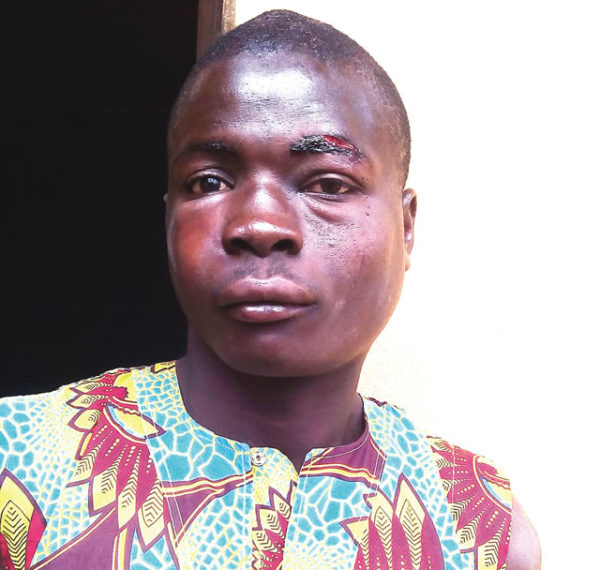 A suspected child abductor has been arrested by the Ogun state Police Command after he was caught by passersby trying to strangle an 11-year-old girl in an uncompleted building in the Oyero area of Ijoko, Ogun State.

According to PUNCH, the suspect, Ola Ibikunle, who confessed to have abducted a 3-year-old boy and sold him for N1,500 to a man in Sango, was handed over to operatives of the Special Anti-Robbery Squad of the Agbado Police Division.

The suspect was beaten by an angry mob before the arrival of the police.

The victim’s father, Segun, narrating the incident, said that he and his children were on their way to church when the abduction took place. He said because they were already late, he began to walk faster than the victim, Eniola and her elder sister, Opeyemi, leaving them behind. That was when Ibikunle ambushed the girls.

“The incident happened around 1pm on Tuesday. We had a programme in our church and we were late. Since Opeyemi is older, I thought they should be able to find their way to the church.

I had gone some distance ahead when some people called me that Opeyemi said her younger sister had been abducted. She said the abductor escaped with Eniola to an uncompleted building and she led us there. We met him holding her by the neck,” Segun said.

Opeyemi reportedly raised the alarm which caught the attention of some passersby.

Speaking to PUNCH Metro, Ibikunle said that he kidnaps children to augment his income as a bricklayer.

“I am a bricklayer, but I use child abduction to augment my wages. A man in Sango area contracted me to always get children for him. I don’t know what he uses them for.

Last month, I abducted a boy of about three years and sold him to the man for N1,500. This girl (Eniola) was the second child I would abduct, but I did not succeed,” he said.

The Ogun State acting Police Public Relations Officer, ASP Abimbola Oyeyemi said that the suspect was arrested with the help of the residents, adding that investigation is ongoing.

Related Topics:AbductionOgun State
Up Next