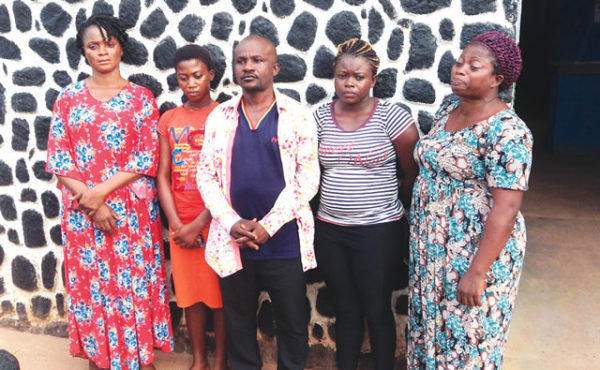 Enugu State Police Command has nabbed suspected fake prophecy syndicate that specialised in working with owners of churches to confirm prophecies in order to win more members for such churches.

This is contained in a statement signed by the command’s spokesman, Ebere Amaraizu, in Enugu on Sunday.

Amaraizu said that the syndicate was nabbed at Holy Ghost park axis and popular P&T axis of Enugu metropolis by police operatives of the Central Police Station in Enugu.

He noted that the syndicate, who were nabbed on August 19 and August 20, included Obi Ejike from Ubaho Okija in Ihiala Local Government in Anambra and Kuku Mary, from Ijebu-ode in Ogun.

The others were Oluwakemi Joy from Ojo in Lagos State, Nwosu Chizoba from Umunze in Anambra and Peter Uchechi from Ebonyi.

The spokesman said that the syndicate was nabbed on their way to a church in Abakaliki and in Enugu to join in the fake prophecy deal before they were apprehended.

“Luck ran out of the syndicate as confusion broke out at a bus-stop among them leading to arguments, which attracted the attention of police operatives,” he said.

He said the police team observed that Ejike and Joy were up to a nefarious act and on further interrogation they revealed their mission.

The spokesman said “the other group billed for Abakiliki church prophecy were trailed and nabbed at P&T bus stop while waiting for bus to Abakaliki”.

Amaraizu said that one of the suspects, Uchechi, maintained that they were recruited in large numbers and kept in a house in Onitsha, Anambra.

Uchechi, he said, maintained that they shuttle to various states to confirm prophecies for the purpose of winning souls for churches and were usually paid through their coordinator.

Amaraizu said Uchechi told the police that they could be detailed to go to any state but the phone number of the linkman in the church was usually provided to them.

The suspect added that the phone number would be for connectivity on arrival and that they usually dialogue with the pastor of the church on the shape the job would take.

He said they would divulge their names, nature of problem they have and other necessary information to the pastor.

“They will state information which is given to the pastor of the church for his guidance and during the prophetic hours they will be among the people with the said problem that will come out,” Uchechi revealed.

Uchechi said the pastor would prophesy and one of them would confirm that before the congregation after been touched and falling under the anointing.

“The pastor would proclaim the problem is all over and that she has received her healing. Some pastors’ use us to grow their church and we are paid later through our coordinator depending on your role,” Uchechi said.

Ejike also confirmed their illicit deal while maintaining that he work hand-in-hand with the coordinator.