From Speaking on Nigerian Jollof Rice to Meeting Some of Nigeria's Biggest Stars, Here are the Highlights of Mark Zuckerberg's Second Day in Nigeria

His first stop was at Co-Creation Hub (CcHub) in Yaba, Lagos, after which he went to Andela‘s office where the Chan-Zuckerberg Initiative had earlier donated $24million dollars.

Here’s what he’s been up to since today.

This morning, he took a quick run across the Lekki-Ikoyi Bridge with entrepreneurs in the Lagos Road Warriors running club. “Best way to see a city,” he said in a Facebook Post.

Later in the day, he held a Question and Answer session with Tech Developers an Entrepreneurs in Lagos.

During the session, Mark commended the energy of the Nigerian entreprenuer. “The first thing that struck me about Nigeria is the energy – the entrepreneurial energy,” he said.

Zuckerberg urged entrepreneurs to focus on learning at all giving opportunities.

He said that being focused on learning would help the entrepreneurs to know new things that would enable their businesses to succeed and grow.

According to him, learning is the process whereby one tries something and fails, but is able to make headway.

“You should not be afraid of failure but you fall and learn from it. You make success when you make mistakes,” he said.

Zuckerberg said that constantly willing to learn had made Facebook to succeed as the platform and had given people the power to stay connected, wherever they were.

He said that to connect with people across the globe entailed having access to the internet.

According to him, building infrastructure is essential to have access to the internet and remain connected with the rest of the world.

Zuckerberg said that it was the wish of Facebook that by 10 to 15 years, everyone across the globe would be connected.

One section of Mark’s speech trending on Social Media was the part on Nigerians’ Favorite Jollof Rice.

He spoke of his experience eating Jollof and Shrimps, and Pounded Yam and Goat meat. “It was delicious, it was really good. I was told not to compare the Jollof rice to that of neighboring countries,” he said.

After the meeting with Tech developers, Mark met with Nollywood actors and other celebrities at the #FacebookLive event #NaijaTalentLounge

He posted a photo the celebrities with the caption: “Visited Nollywood, crashed a hip hop music video, and met some of Nigeria’s biggest stars”.

Basketmouth says he was telling Mark “a thing or two”. LOL 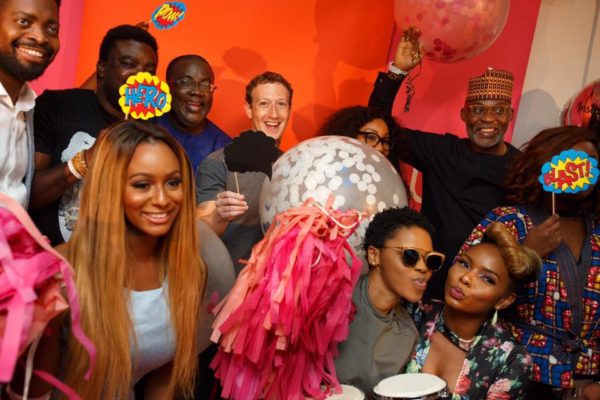 Ade Olabode: 3 Things To Do For Long Term Survival As a Business Owner