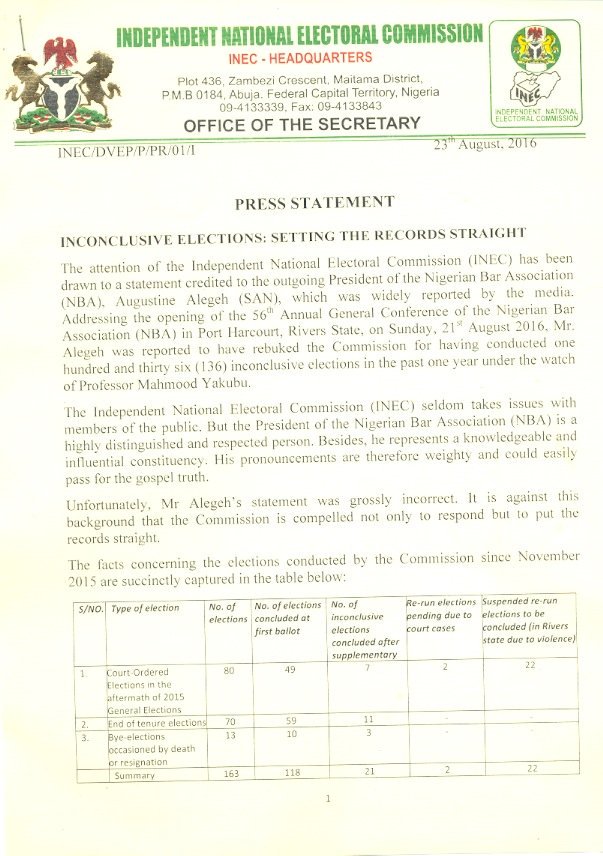 This is contained in a statement signed by the Acting Secretary to INEC, Musa Adamu, issued on Wednesday in Abuja.

The commission said that its attention had been drawn to a statement credited to Alegeh in which he rebuked it for conducting 136 inconclusive elections in one year under the watch of Professor Mahmood Yakubu.

It quoted Alegeh making such remark at the 56th Annual General Conference of the NBA in Port Harcourt, Rivers State, on August 21.

It acknowledged that Alegeh was “highly knowledgeable and respected” but stated that his statement at the 56th Annual General Conference of NBA in Port Harcourt on Sunday was unfortunate and grossly incorrect.

According to INEC, 163 elections comprising 80 court-ordered elections in the aftermath of 2015 general elections, 70 end-of-tenure elections, 13 by-elections occasioned by death or resignation, have so far been conducted by the new commission.

It stated that out of the 163 conducted elections, 118 were concluded at first ballot and 21 concluded after supplementary.

It added that two cases were pending, while 22 suspended re-run elections in Rivers due to violence were to be concluded.

According to it, the conditions for declaring an election inconclusive are stated in Sections 26 and 53 of the Electoral Act 2010, as amended.

“The commission remains unwavering and irrevocably committed to delivering elections that are free, fair and credible and to ensure that the vote of every eligible Nigerian counts,” it said.