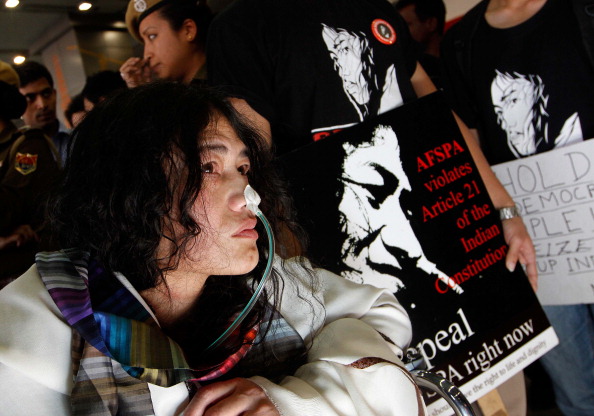 Indian rights activist Chanu Sharmila, on Tuesday promised in New Delhi to end her hunger strike of 16 years in order to run in 2017 state elections.

Abhirr VP, Amnesty International India Spokesperson, said that Sharmila, who has been fasting for past 16 years, is ending the fast on Tuesday, with the aim of trying a different agitation.

She recalled that Sharmila launched her hunger strike on November 2, 2000, to protest the Armed Forces Special Powers Act (AFSPA), a controversial law that gives armed forces special powers of search and seizure in troubled regions.

VP said that the activist launched her protest against AFSPA after 10 civilians were killed by security forces in insurgency-hit Manipur.

She said that Sharmila, also known as “Iron Lady of Manipur” for her steadfast campaign, promised to contest the chief minister of Manipur in the upcoming state elections.

The spokeswoman said that Sharmila pledged to repeal AFSPA if she is elected.

AFSPA is usually applied to militancy-affected regions and gives Indian armed forces sweeping powers of search and seizure without warrants, allowing them to shoot to kill in some situations.

The activist said that the law has been misused by security forces.

L Rebada, Sharmila’s lawyer, said that her client would remain in judicial custody till her bail papers are cleared.

“We don’t know when the release orders will come,” Rebada said.

The lawyer disclosed that Sharmila had been taken to the Imphal hospital where she has been kept for several years and force fed through a nasal tube.

Rebada said she was arrested a few days after she started her fast on charges of attempting suicide and has been in judicial custody since then.

“No retreat, no surrender” – Abubakar Sidiq says after his release from EFCC Custody