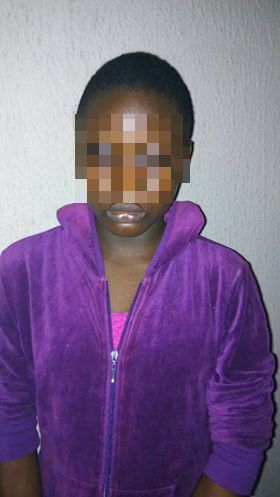 A couple of days ago, some photos and a video of a man flogging his “daughter” after he caught her sleeping with her boyfriend, emerged on social media.

The incident, it was reported, took place in the Ohaozara local government area of Ebonyi State.

She was beaten at the house of the Coordinator of Ohaozara Development Centre, Ogbonnaya Ene Odi. It was at Odi’s house that the girl was stripped unclad and flogged like a thief, while others recorded and took pictures which they circulated on social media.

A House of Representatives member Linus Abaa Okorie, representing Onicha, Ohaozara and Ivo Federal Constituency in Ebonyi state, was approached by the family, and after speaking with the girl, discovered that the inhumane act was carried out by four persons, two of whom are policemen.

Earlier today, I met one on one with Uzoamaka, the unfortunate 15 year old JSS 2 student from Uburu in Ohaozara LGA of my constituency who was recently made “popular” by unknown persons who brutalized and dehumanized her through torture and defilement of her humanity. I met her on the invitation of her family who seek inquest into her sickening ordeal and also justice for her. I also insisted on hearing directly from her on the circumstances of her torture and public defilement. For if I must speak about it, I should do so on the strength of first hand information and a conviction that she is truly a victim.

Her story is heartrending and painful. And truly she is a victim of inhumanity and highhandedness of misplaced power/authority.

First, she is a 15 year old minor and wait for it…an ORPHAN! Her father died while she was only 4 in 2004 and her mother painfully followed suit two years later in 2006 when she was barely 6 years old. So she had no father to catch her in the immoral circumstance that was earlier reported. That story is on all scores a fabrication to deceive the public into antagonizing her to cover the tracks of her aggressors.

Two, her family is too poor to own that ‘rich’ apartment where she was tortured, molested and traumatized or the cars in the foreground of the premises. Indeed, she claims to know the owner of the house who she reports is the leader and mastermind of her unfortunate ordeal. She remembers and positively identified more than four persons who participated in that show of inhumanity on her.

More disturbing of her revelations is the fact that TWO SERVING POLICEMEN were actively involved in this inhuman and illegal act of primitivity, along with a key political leader of her immediate environment. These two categories of public officers are those to whom one would have expected her to run if confronted with the circumstance as she suffered in their hands.

While condemning the grievous and indecent dehumanizationvthat was the torture and public unclading of Uzoamaka, one is more particularly alarmed by the mindless act of video recording the entire nauseating scene and posting online of such vile and murderous product by the same perpetrators.

Finally, I refuse to pronounce anyone guilty in this most inhuman criminality pending thorough investigation by security agencies, I however condemn it in the most strongest of terms.

Okorie took up the case, and Uzoamaka was featured in Radio Nigeria (FRCN)’s 7AM broadcast, and AIT’s Kaakaki on Monday. Okorie later announced that a philanthropist awarded Uzoamaka full scholarship to university level.

According to Vanguard, following the development, the police has arrested the Odi who is regarded as the mastermind of the brutalisation.

A source told Vanguard that Uzoamaka was beaten because Odi and his cohort said she was in the habit of prostituting and sleeping with almost all men and even the married ones in the community, adding that flogging her will serve as a deterrent to other teenage girls.