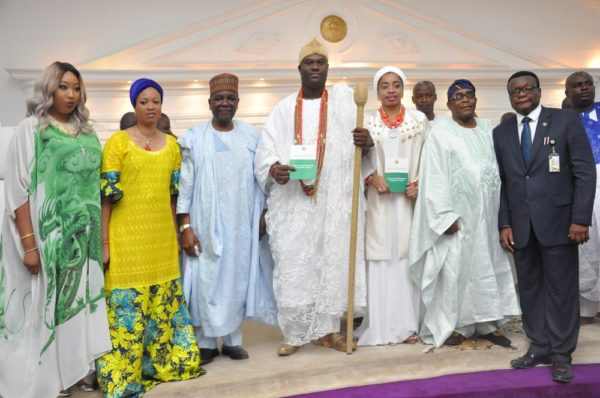 The ceremony had in attendance the former head of state and Goodwill Ambassador of Hepatitis Advocacy in Nigeria, General Yakubu Gowon; the Executive Secretary SHECA Foundation, Adepeju Hameed; the Obasewa of Ife and the Chairman SHECA Foundation,  John Agboola Odeyemi; the new Acting Vice Chancellor of Obafemi Awolowo University, Ile-Ife, Professor Anthony Elujoba; and many more.

In a statement signed by the Director of Media and Public Affairs, Ooni’s Palace, Moses Olafare, Ooni Ogunwusi, after receiving the award said; “this is no ordinary award but a reminder of his commitment to progressive Nigeria and not just Hepatitis free Nigeria but a healthy and wealthy Nigeria”.

Her Royal Highness Olori Wuraola Otiti Ogunwusi, was also honoured as the Royal Ambassador for Hepatitis Advocacy in Nigeria by the foundation.

This started with a walk personally led by her royal highness from the Ooni’s Palace round the city of Ile-Ife with notable actors and actresses from the Nigerian Nollywood scene to mark this year’s world hepatitis day in Ile-Ife.

General Yakubu Gowon GCFR described as laudable, the honour given to her highness. He said having her as the Royal Ambassador is the right step in the direction, and commended the foundation for their foresight in selecting her as their Ambassador.

Her royal highness in her speech at the ceremony said SHECA foundation has laid a very good foundation to a hepatitis free Nigeria and she will do everything in her power to support the foundation and ensure the goal is achieved.  She admonished well meaning Nigerians to join hands with the foundation in its quest to hepatitis free nation as it takes collective effort to achieve such.

“Anybody thinking Nnamdi Kanu will Renounce Biafra is Mad” – Spokesperson