"Anybody thinking Nnamdi Kanu will Renounce Biafra is Mad" - Spokesperson 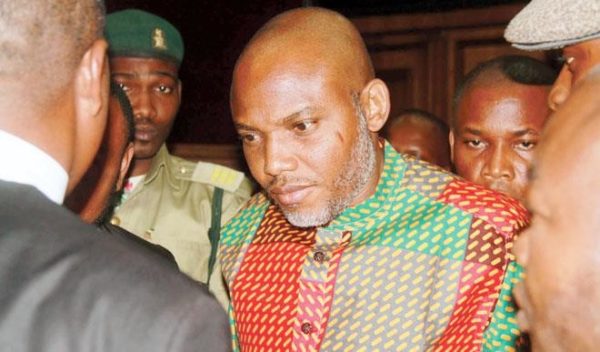 Reacting to a statement credited to the Movement for the Emancipation of the Niger Delta (MEND), the embattled leader of the Indigenous People of Biafra (IPOB), Nnamdi Kanu has said that he’d rather die than renounce Biafra, Vanguard reports.

MEND had, in a statement last Saturday, said that FG, as part of the deal for a return of peace to the oil-rich Niger Delta, has agreed to release Nnamdi Kanu, along with a former MEND leader, Henry Okah, who is serving a jail sentence in South Africa, Okah’s younger brother, Charles, and Obi Nwabueze.

We want to make it categorically clear that MEND and their Ahithophel Team are strictly on their own and do not in any way, shape or form represent IPOB or the leader of IPOB, Mazi Nnamdi Kanu. When we say ‘Biafra or Death’, we meant every syllable of that phrase.

Again, we reiterate that Nnamdi Kanu is not Ralph Uwazuruike and IPOB is not MASSOB. Therefore, anybody thinking that our leader will renounce Biafra is certifiably mad. For both IPOB and their leader, Nnamdi Kanu, it is either we get Biafra or we die on the process of getting it. There is no middle ground.