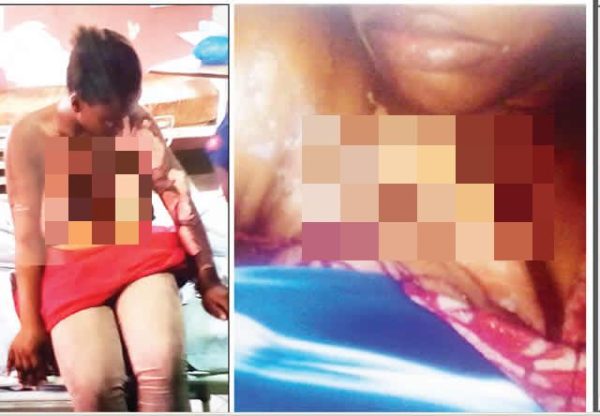 Two women in the Yaba area of Lagos state have suffered severe burns after emptying a kettle of hot water on each other.

PUNCH reports that the duo have been quarreling over a man.

Biliki, 32, who was living with her husband in the Surulere area of the state, relocated to her parents’ house in Abule Oja, Yaba, in 2015, after separating from her husband.

Muyibat lives with her husband and three children in the house at Yaba.

Narrating her side of the story, Muyibat said:

Biliki told neighbours that she once dated my husband and that she aborted for him during their relationship.

She calls me ‘Iyawo Sara’ (free wife).  I have never known peace in that house. She fights me over every minor issue.

On Saturday, I went to the market with my husband and when we got home, my child started crying.

Biliki’s younger brother, Ahmed, came out and shouted at him and I cautioned him.

His sister then picked up a quarrel with me and started raining curses on me. I did not talk because I was observing a fast. While she was abusing me, I sneezed and said, ‘Ausubillahi minashaitani rojeem’ (God, deliver me from the devil).”

Muyibat said Biliki, who is also a Muslim, thought she was referring to her and queried her for calling her a devil.

She alleged that Biliki attacked her in the process.

I removed the water I was boiling for my vegetables and put it on the table. She (Biliki) held my head from behind and poured the hot water on me.

Her younger brother slammed a plastic paint on my head, while she drew my hair. Both of them assaulted me.

She added that she reported the case at Sabo Police Station. She also said that Biliki had threatened to bath her with acid.

Biliki, giving her own account of how the incident occurred said:

I went back to my parents’ house when I had issues with my husband. Because of that, many of the tenants started ridiculing me.

I was ill that Saturday and was sleeping beside my baby. Her child had come to play with my baby when she called him back. When the child didn’t heed her call, she hit him and the child started crying.

Another child passing through the passageway was also crying that particular time. My younger brother asked the other boy to stop crying and Muyibat abused my brother.

My brother reported her to me and I told him not to reply her. She then started insulting me. We fought and our neighbours came to separate us.

I was backing her when somebody suddenly shouted, ‘hot water!’ As I turned back with my hands raised, she emptied a kettle of hot water on me. Because my hand was raised when she attacked me, a little of the water splashed on her.

Biliki, who suffered burns on her breasts, chest and hand, said Muyibat also bit her brother when he came to separate them, adding that her two phones were smashed by Muyibat.

Are you a Talented Artist? Arthouse Foundation is Calling for Applications for the 2017 Artist Residencies in Lagos | Deadline for Application is September 2nd