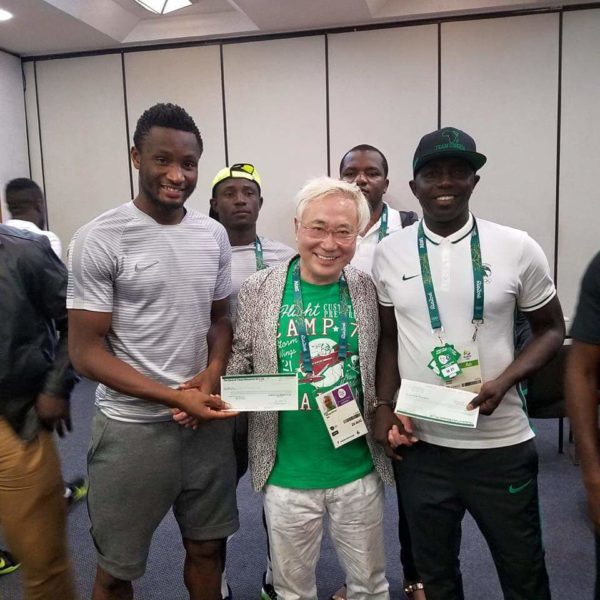 The Nigeria Football Federation (NFF) has reacted to a tweet by former goalkeeper, Peterside Idah suggesting that the Federation wanted to ‘hijack’ the donation to the team by a Japanese plastic surgeon, Dr. Katsuya Takasu.

Takasu had before the game announced that he was going to watch the 3rd place game between Nigeria and Honduras on Saturday, and present the $390,000 to the team ($200,000 in Coach Samson Siasia‘s name and $190,000 in Captain Mikel Obi‘s name).

Idah had tweeted before the game that the NFF wanted to hijack the money.

More trouble in the dream team camp….the money from the Japanese man to the dream team.has been hijacked by the NFA .they want to use

THE money to pay the coaches as salaries/ Bitrus Bewarang was sent to get the money from the Japanese ,but the players say it’s there money

THE NFF and the players are in a word match saying if they play they will never get the money. BREAKING NEWS.

His message was a lie, an atrocious false alarm before an important match. I had exchanged correspondence with the Honourable Minister on the issue of the donation and we agreed that there was need for caution. The Minister said to me that he read the donation in the papers and had expressed serious concern. I also received a mail from the NFF Integrity Officer who expressed very serious concern with this kind of donation.

I got in touch with the Ambassador of Nigeria to Brazil and the Honourable Minister to say that whatever had to be done should be done after the Bronze Medal Match, to avoid any distractions. The NFF may be having financial challenges, but I assure you nobody in the Federation is interested in that money.

If we get the Government’s go-ahead to collect the money, no official of the NFF will be involved even in the collection. The money will be received directly by the team.

Pinnick added that the status of Nigeria as a sovereign nation, and the integrity of Nigeria football, is bigger than such financial gains.

“If we had rushed to collect that kind of money and hand over to the players, the same people who are condemning the NFF now would have said worse things. There are matters in the football world today that FIFA and the various confederations frown at. We are very much aware of that,” he said.

The NFF has not collected any money from Japanese plastic surgeon, Dr. Katsuya Takasu, as against the misinformation by Mr. Idah.

Dr. Takasu has however, handed the cheque to Siasia and Mikel Obi.

Are you receiving your Foundation and A Level results this week? DMU is still recruiting for September 2016, Meet with Representatives and Get £3,000 Discount off Tuition | August 20th – 24th