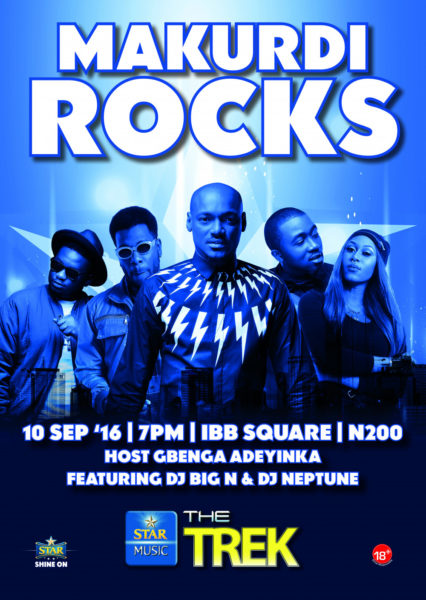 Star Lager Beer has revealed plans to kick off the 2016 edition of the annual nationwide concert, Star Music Trek holding in five cities around the country – Markudi, Abuja, Calabar, Owerri and Lagos.

In an exciting online unveil, artistes performing on the Star Music Trek made the official announcement, as they took to their individual social media platforms to share this news with fans.

On board the Star Music Trek with spinning Deejays are DJ Neptune and DJ Big N, while the hosts will be Lafup and Comedian of the Federal Republic – Gbenga Adeyinka, cracking up the revelers at various city concerts.

2Baba Idibia also posted on his Instagram page saying; “Star Music Trek 2016 is going to be an experience to remember. Come lets rock your city”

An elated D’banj also had this to say; “ It’s been three years since my last appearance on Star Music Trek and I’m back! Expect nothing but the best!”

This sign-on announcement signals the start of My City Rocks themed concerts in the coming months brought to you by Nigeria’s foremost beer brand, Star Lager. First stop for the city concert is Makurdi on Saturday 10th of September 2016.

#BNBling: Mateo Vic proposed to his wife Ada while Shooting a Music Video dedicated to Her | Watch the Magical Moment – She Cried!