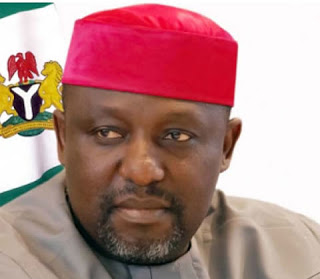 Governor Rochas Okorocha of Imo State has dismissed the assertion that the President Muhammadu Buhari‘s visit to Germany was more of a medical trip than official engagements.

He was reacting to the media interview granted by a Kano-based social commentator and former lawmaker, Dr. Junaid Muhaamed.

Muhammed had alleged that Buhari visited Germany on Friday to seek medical attention over an undisclosed illness.

Okorocha, however, debunked the allegation, saying that the official engagements of Buhari in Germany, had no connection, whatsoever, with medication.

He said the visit to Germany only ended on a compassionate note on Saturday with the president’s convoy veering off its way back to the airport in Berlin, to visit a Nigerian military officer receiving treatment in a Berlin hospital.

“The President never went for any medical check-up. At least I was with him till 1.00AM, after the dinner before I left him and he went to bed,

I went to bed and the following day I came out to see him in the morning, So, the president never went for any medical at all. The only hospital we went to was to see a general who had an accident.

These are some of the things that people make uninformed comments and I do not know why in this part of our world we are always happy when someone is going down. I think there is need to change our attitude completely.

If this issue had been on issue on how to move Nigeria forward, you won’t see on social media, you will not see comment on it, nobody we talk about it,’’ he said.

On the content of the President’s wife BBC interview and the subsequent reply by Buhari, he said Aisha did not grant the interview to bring down her husband as being insinuated in some quarters.

He equally maintained that the president’s reaction to the interview was just on a lighter mood, saying that Buhari was only cracking jokes.

Okorocha, who narrated how his wife once joined some commissioners and workers in Imo to condemn certain official decisions he took, said Aisha’s comments were not meant to disrespect the president or the All Progressives Congress (APC).

He said her comments were targeted at making peace with perceived aggrieved members of the APC.

“If you have been with the person of the the President and where he cracks jokes, you will understand with me that it could be his style of jokes because even when he was responding, he was smiling, I don’t think the meaning that is given to it is what it is.

If not, why would he have his five daughters having Masters and Ph.Ds and his wife educated, and putting women in key positions in the country, I don’t think it is.

Aisha Buhari, who granted the interview did not give that interview to bring down her husband’s government.

She was only trying to make peace among perceived aggrieved members in the polity. I have situations where my wife joins commissioners and my workers to condemn what I do, that does not mean she is fighting me, rather a bridge of peace between me and them,” Okorocha stated.

The governor described the visit as “very successful and worthwhile”.

“The visit to Germany was a worthwhile visit, we enjoyed a lot of courtesies, I feel very proud as a Nigerian and to see our nation’s flag flying in Germany and the President discussed issues of common interest with the German Chancellor.

We are beginning to gain back our dignity and respectability among nations, I think this is not far from the type of leadership Nigeria has now.

The respect that is given to Nigerians now is the respect given to our President that is trickling down. I feel proud in spite of the challenges we are facing as a nation,” he said.

According to him, the two leaders discussed among other things, the need to de-emphasise the issue of formal education for vocational education.

“This goes to say that Nigeria was going along the right way but deviated, what drives German today is not formal education but informal education, skill acquisition,” he said.

In Nigeria here we have almost 2 million Internally Displaced Persons (IDP), and not only displaced, the entire school system was shut down for about four to five years. So, we have a lot of challenges in that regard but Mr. President made it clear that he intends to restore economic activities in the North East.

We also would like partnership or assistance from any caring nation and German government willing to assist Nigeria in that regard.

Most importantly, is to stamp down the cause of the refuge, which is the activities of Boko Haram and this government is making frantic efforts to bring it to an end.

On those calling on President Buhari to take a second look on his cabinet with a view to effecting changes where necessary, the governor stated that there was nothing wrong for the president to listen to such calls.

According to him, as a governor he knows where the shoe pinches more.

“It is natural that people who are in the game and those who outside tend to see more, if there is a clarion call for Mr President to take a look at his cabinet and bring in more people.

There is nothing wrong for Mr President to take note of comments by people because if everyone keeps saying the same thing, there may be sense in what they are saying but that is not really the situation that should create a big hullabaloo.

Most members of the party felt that they have not been carried along, I know that many of them complain every day, they want board appointments released so that there will be calm.

Some local governments and villages are saying they have not been remembered, so at what point do we draw this line but there is always room for amendment because there is no perfection,” he said.

She Leads Africa rocked yet another city! Check out all the FUN Photos from SheHive Lagos

Is #AsoEbi Killing the Gifting Culture in Nigeria?