The Court of Arbitration for Sports (CAS) has reduced Maria Sharapova‘s two-year doping ban to 15 months, following her appeal.

With this development, Sharapova will be able to return to the tennis tour on April 26 next year.

The five-time Grand Slam winner, 29, was initially banned by the International Tennis Federation (ITF) for two years after testing positive for meldonium at the 2016 Australian Open. 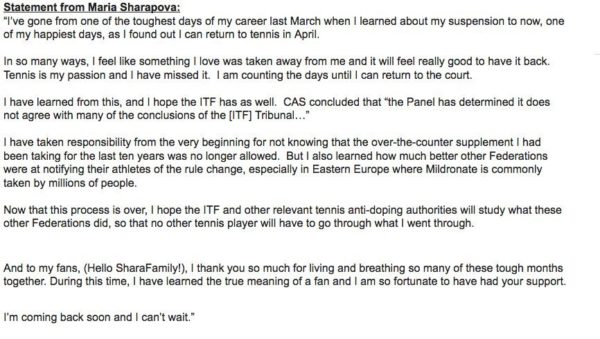 While delivering the ruling, the CAS did not absolve Sharapova of any negligence in continuing to take meldonium after it had joined the banned list on Jan 1. Instead, this second panel made a distinction between “fault” (which was present, in their opinion) and “significant fault” (which was not).

Related Topics:Maria Sharapova
Up Next

Participate in Home and You Summer Giveaway & Win amazing Prizes