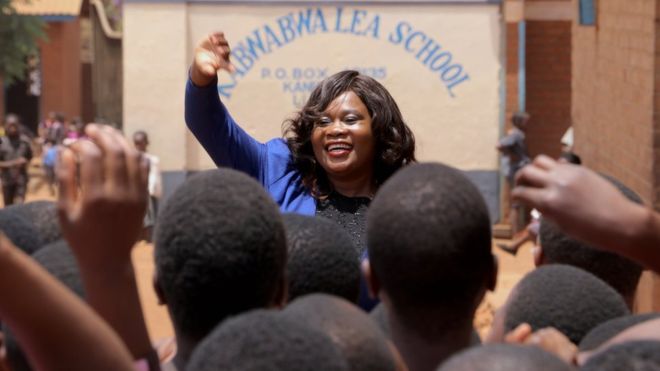 Earlier this year BBC shed light on a traditional ceremony in parts of Malawi, where pre-pubescent girls as young as 10 years old are ushered into ‘womanhood’ by a man (called a hyena) who forcefully penetrates them while blindfolded.

Click here to watch an interview with one of these men, Eric, who has had sex with 104 females – he is also HIV positive, but the custom forbids them from using condoms during this act. Police arrested him soon after the story broke – click here.

Many of the girls end up pregnant, or with diseases, as the men do so without protection. The men’s identities are also guarded by the women who allow the ceremonies, and the girls are not allowed to tell younger girls what’s in store for them.

Natasha Annie Tonthola went through the practice herself, and now speaks out about it to her local communities.

We were told that we were going to learn about womanhood, and to be honest I was excited. So was every other girl.

On the last day one of the female elders told us that we had reached the final part of the process. She said a hyena was coming to visit us. “Don’t worry, I’m not talking about an animal,” she said. “I’m talking about a man.”

But we didn’t actually know what a hyena is, or what he was going to do. They don’t tell you he’s going to have sex with you.

The female elder came in and said, ‘Congratulations, you have finished the initiation ceremony, and you are a woman now’

We each had a piece of cloth and we were told to put it on the floor. We were told that it was time to show that we knew how to treat a man, that we knew what to do for our future husbands. Then we were blindfolded.

The man comes, and he tells you to lie down, you open your legs and he does what he does. We weren’t allowed to know who the man was – only the elders know.

We were young girls, so we were tense, and this man would push our legs open. I found it painful. When he finished, I was relieved. The female elder came in and said, “Congratulations, you have finished the initiation ceremony, and you are a woman now.”

Many girls think this is normal because we are in a way brainwashed, we think it is OK because it is tradition.

But the hyena didn’t use protection and some of the girls got pregnant.

When we got back home, we weren’t allowed to chat or play with girls who hadn’t already been through the ceremony. I wasn’t allowed to tell my younger sister anything about it. Girls are entering puberty earlier, and getting their periods at a younger age, so now the ceremony is happening to girls as young as 10 or 11 years old.

She later went on to have a hard life, as her father died, and her family moved to South Africa to avoid her mother being ‘inherited’ by his brother. In SA, she had to work menial jobs to help make ends meet.

She ended up going back to Malawi to marry a man 15 years her senior, who used to hit her and nearly killed her after she left him.

One day he came to the house that I was living in. I don’t know how he got my address, but he seemed calm, so I let him inside. He said he wanted to see me, and that he also wanted to see his daughter, who was at that time three years old. He told me he loved me, that he was sorry and that he was a changed man.

“We’re still married, and I’ve done so much for you,” he said. “If it wasn’t for me paying your fees and taking you and your miserable family in, you wouldn’t have become what you are today. You owe me.”

I told him: “Once bitten, twice shy.”

I certainly didn’t want to get back together with him. He shouted and threw things and then he started choking me – even though my daughter was sitting on my lap. He would have killed me if the neighbours hadn’t heard my screams. They burst in and threw him out. I didn’t press criminal charges, I didn’t want to make my case more public than it already was. But I did get a restraining order to keep him away from me.

Now she dedicates her life to work and service with her foundation – Mama Africa Foundation Trust which fights against wife inheritance, sexual cleansing and gives young girls access to sanitary towels.

My community organisation continued to educate people but it was hard, particularly when we were challenging traditions such as the use of hyenas and wife inheritance.

In some communities they told us: “Just because you are educated, doesn’t mean that you should tell us what to do. These traditions and customs have existed for time immemorial, and we’ve practised them for ages without any harm.”

But some elders and religious leaders listened, and some have stopped the practice in their villages.

In my community work I soon learned more about the barriers for girls in school. If families are going through a financial rough patch, they’re more likely to pay fees for boys rather than for girls. If girls drop out of school, the family is eager to marry them off rather than have them sit around the house all day. And many girls miss class because they can’t afford sanitary towels.

To try to solve this problem, one of the main things my organisation is doing is distributing eco-friendly reusable washable sanitary pads and pants. They come as part of a kit including pants with clips so that they stay in place and a waterproof bag, in case girls need to change them in school. They are biodegradable, but cost effective and durable – they last for five years. I’ve also expanded into nappies. I hope these will encourage much less waste to go into landfill.

In 2011 I realised I needed to establish a formal organisation, and that was the start of Mama Africa Foundation Trust. We have distributed so many sanitary towels that I have lost count. I call this initiative Project Dignity.

Despite everything that’s happened I’m optimistic about the future. I think there is so much we can do for the women and children who are victims of hyenas, of gender-based violence, and all the other social evils and challenges that are out there. It will be tough, but I have hope.

Lola Gani-Yusuf: 5 Habits You Should Quit to Become a Better You