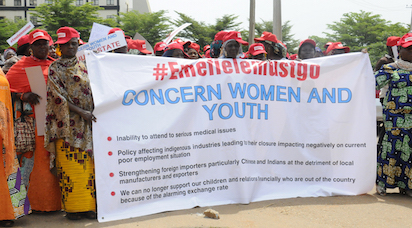 Some protesters under the aegis of “Concerned Women and Youths” on Tuesday stormed the Central Bank of Nigeria (CBN) Headquarters in Abuja to demand the resignation of the CBN Governor, Godwin Emefiele.

They held placards with inscriptions: “Emefiele must go” and “Where is your conscience, Emefiele?”

According to TODAY.ng, the protesters converged on the headquarters of the National Council of Women’s Society (NCWS) before moving to the CBN office with placards.

“We are law-abiding and responsible citizens of this country who are bothered about the present state of the economy, particularly the continued monetary policy crisis that is causing Nigerians severe hardship. We are aware that this situation is due to the many ill-conceived and inconsistent policies of the CBN under your control as governor.

We are here to register our loss of confidence in you. The CBN under your direction has lost focus as its policies since you took over have all been unfriendly and counter-productive. We therefore demand that you immediately resign from office to enable Mr. President to appoint a more competent hand. We give you one week to resign, failure of which we shall start to occupy the front of the bank until you do so,” said Patricia Orukare, the leader of the protesters, to CBN officials who received the protest letter.