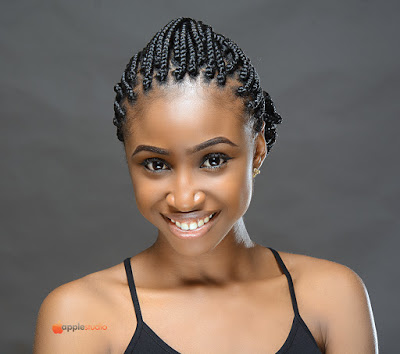 Over the weekend, embattled Miss Anambra 2015 winner, Chidinma Okeke spoke to The Nation on the recent lesbian sex tape released a couple of weeks ago, featuring her and another lady.

She accused Anambra Broadcasting Service (ABS), the organisers of the pageantry, of persuading her to engage in lesbian sex in front of a camera for her to emerge as the winner.

She alleged that ever since she won, she became a slave, as the organisers have been using the videos to blackmail her.

She debunked claims that she had planned to commit suicide, adding that her blackmailers have stopped contacting her

“Early last year, the ABS advertised for the Miss Anambra beauty pageant. I heard of it and went to make enquiry.

My roommate was also interested, but one of the organisers told me to apply. I told them I was not interested but the man insisted that I might win the competition. He also promised to give me the form for free if I indicated interest, and he did when I agreed to contest.

But one Jane told me that before a winner would be declared, there were certain things to be done, including the (sex) video. I consented after some persuasion from the organisers. I later went for the contest at the Marble Arch Hotels in Awka, and I was declared winner with a Kia Rio vehicle as star prize.

When I went for my car after the contest, the organisers brought out a contract form for me to sign, but I told them I wanted to contact my lawyer to see it. I was not given the opportunity to do so.

What they kept telling me was that if I insisted on not signing the contract or wanted to contact my lawyer, they would release the video.

At that point, I became uncomfortable and signed the contract to avoid such embarrassment, and the car was released to me from where it was packed within the premises of ABS.

From that moment, I became a slave to them. On October 11, 2016, they called me to come and make presentations inside the office of one the organisers. After that, the man excused some people in that room and showed me the video again.

They told me to drop my car and removed my crown from me. I told them I would take the car as stipulated in the contract. They insisted I should pack it in the premises of (ABS).

I told my uncle in Abuja about the situation. My uncle called them and asked them to release my car to me. Instead, they forwarded the video to him as part of the blackmail. That was what happened,” Chidinma said.

She also denied that she is a lesbian.

Following the interview, the Managing Director of ABS, Uche Nworah, in a statement on his Facebook page insisted Okeke lied. He alleged that some persons were using the sex scandal to settle political scores in Anambra state.

He shared a photo of the signed contract and wrote:

There is an Igbo saying that the more you repeat a lie, at some point people may begin to believe that it is the truth.

On this former Miss Anambra sex scandal, the management of the Anambra Broadcasting Service had previously released a press statement disassociating the organisation from it. We still stand on that statement.

It is however important that I correct certain statements that are being made on this forum and in other fora especially concerning the interview Miss Chidinma Okeke granted the Nation newspaper today.

There appears to be an agenda to push falsehood to the public and in so doing malign me and the Anambra Broadcasting Service over a matter that we know nothing about. It appears that our silence over the matter, except the press statement we issued earlier is now being exploited by those who are bent on using the Miss Anambra sex scandal to settle political scores in Anambra state.

It would also appear that Miss Chidinma Okeke has become a pawn in a larger politically motivated conspiracy.

The ABS as a socially responsible organisation fulfilled to the letter every part of the contract signed with Miss Chidinma Okeke, former Miss Anambra. This includes paying ALL her prize money of the sum of one million Naira only.

She collected her last installment of N50,000 on the 11th of October 2016, the day she handed over the crown to the organisers. We have records of her signing for all the payments.

We had to take the measure of inviting the former Miss Anambra to the office on this date as that was the day an anonymous individual had forwarded the videos to myself and some other persons I do not know accusing the former queen of being a lesbian.

The person said he was in possession of such similar videos numbering over 10 allegedly showing the former queen in lesbian acts, as well as her friends in the lesbian video performing sexual acts with men.

Details of these WhatsApp messages have been made available to the law enforcement authorities. We took this decision as we did not want the brand to be smeared with such a scandal as contained in Clause 1 of the contract.

After the handover of the crown by Miss Chidinma Okeke to the Miss Anambra project executives in the presence of the ABS management in the office of the ABS MD/CEO, I dismissed all the other members of the management with the exception of the ABS lawyer and one of the Miss Anambra project executives. I went on to show Miss Chidinma Okeke the videos I had received that day from the anonymous individual and the messages from the person, I then asked her if she had any knowledge of the video and she said yes. I advised her to go home and confide in her family. I have not seen nor spoken to her since that day as I do not know her whereabouts.

Miss Chidinma Okeke was not forced to sign the contract under duress as alleged, rather a certain Nwakonobi Ifeanyi who is married to her sister and acting as her guardian co-signed with her after they had taken the contract home, studied and consulted over it.

As a respectable pageant, we have certain rules and regulations guiding participation in the pageant and conduct of the queen during her reign. During her one year reign, we supported Miss Chidinma Okeke the very best way we could including sponsoring her to represent Nigeria in the Miss Intercontinental pageant which held in Frankfurt Germany in December 2015. We sponsored her alongside one of the contestants who represented São Tomé. This was our way of creating opportunities for them and opening doors to international fame and modelling. Though not stated in the contract but we also secured a free unlimited one year business class return tickets to any destination in Nigeria for her and her chaperon from one of our airline sponsors.

There is no iota of truth in the allegation that ABS is blackmailing Chidinma Okeke over monies realised at her birthday party. As our reigning queen, we organised a birthday party for her and used the occasion to present to the public her pet project. The event was co-sponsored by her uncle who was also at the event alongside veteran Nollywood actor, Sir Obi Okoli who did not stay till the end. Miss Chidinma Okeke and her uncle can testify that no money was realised at the event as it was not a fund raising. Rather, the guests that spoke encouraged her with words.

The Miss Anambra Beauty Pageant platform is indeed a wonderful one. There is nothing wrong with the pageant. We have had winners and participants on the platform who have gone on to do big things in their lives and modelling careers. The pageant is solely private sector funded. The state government does not sponsor the pageant so please do not believe the false story that the Anambra state government spends millions of Naira sponsoring the pageant.

If you live in Awka or Anambra state, you will confirm that it is usually a big event which generates a lot of excitement and buzz. As an organisation, the pageant generates entertainment content and some revenue for the ABS.

From the audition to the final event itself, the contestants are treated with the highest respect, courtesy and dignity. They sign a document detailing dos and donts and pledge to be of good conduct and behaviour both during camp and during the reign of the eventual winner. In the past, the organisers have had to dismiss some finalists from camp for misconduct, one for giving her number out to a hotel guest where they are camped and another for being rude to fellow contestants and the chaperon.

The pageant is judged to the highest standard. The judges are usually former acclaimed national beauty queens and showbiz personalities. The pageant overall is managed by a Pageant Creative Director who is a former Miss Nigeria. We take every care to ensure that we deliver a good show every year.

There are no preconditions of appearing in a sex video to contest in the Miss Anambra pageant. We have had hundreds of contestants on the pageant and they can testify to that. It makes no sense to try to blame the organisers over an act that is as a result of one’s folly and greed. If perhaps the said Miss Chidinma Okeke fell victim to conmen who tricked her into believing that she will win a beauty pageant if she appears in a sex video, if she goes ahead and participates in the said video and the conmen turn around to blackmail her and extort money from her with the sex video, how can I or the ABS be blamed for that? Did the other participants and contestants on the show suffer the same fate?

Regarding the issue of the Miss Anambra vehicle, in line with clause 10 of the contract, the vehicle is an official car which the organisers reserve the right to withdraw at the end of the queen’s reign. It does appear that the issue of the car is what concerns the former queen the most as statements to the media by her father, and even text messages to me and discussions from people from her camp suggest so but clearly as can be seen from the contract, the ABS acted as per contract signed.

It is obvious that those who have been at the forefront pushing this falsehood and allegation that I, Uche Nworah or the ABS has anything to do with this have ulterior motives.

In this day and age of social media, it is now easy for anybody to manufacture falsehood and post on social media for the unsuspecting public to read, like and share but in the end truth triumphs. 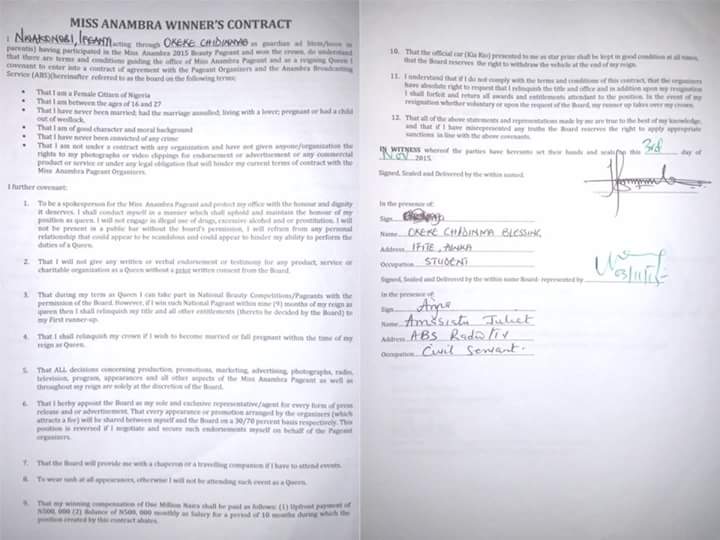 Photo of the signed Contract

We are Succeeding Because of Prayers – Governor Simon Lalong of Plateau