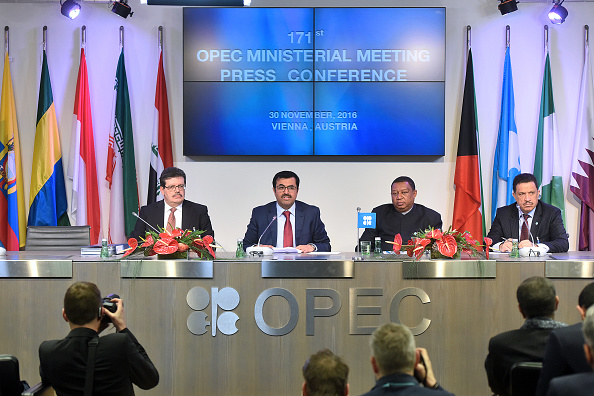 From left to right, Mohamed Hamel, chairman of OPEC, Mohammed Al-Sada, Qatar’s minister of energy and industry and president of OPEC, Mohammed Barkindo, secretary general of OPEC, and Hasan Hafidh, head of public relations of OPEC, attend a news conference following the 171st Organization of Petroleum Exporting Countries (OPEC) meeting in Vienna, Austria, on Wednesday, Nov. 30, 2016. Oil rose the most in nine months after OPEC ministers were said to have forged a deal to cut production, sending stocks of energy producers and currencies of commodity-exporting nations higher.

After seven hours of deliberation, the Organisation of Petroleum Exporting Countries (OPEC) has agreed to reduce oil production by around 1.2 million barrels per day from January 1, 2017.

However, Nigeria and Libya were exempted from the cut, while Indonesia suspended its membership after refusing to agree to the deal.

Qatar’s Minister of Energy and Industry, Dr. Mohammed Al-Sada, said this at a news conference at the end of the 171st meeting of the Conference of the OPEC on Wednesday in Vienna.

The meeting started at about 9:30AM and lasted till about 5:30PM.

This is the first time since 2008 that an agreement of this nature was reached to reduce supply in spite of several attempts.

“This agreement was reached following extensive consultations and understanding reached with key non-OPEC countries, including the Russian Federation that they contribute by a reduction of 600,000 barrel per day.

The duration of this agreement is six months, extended for another six months to take account of prevailing market conditions and prospects.

We also agreed to establish a Ministerial Monitoring Committee composed of Algeria, Kuwait, Venezuela and two participating non-OPEC countries, chaired by Kuwait and assisted by the OPEC secretariat.

They are expected to closely monitor the implementation of and compliance with this agreement and report to the conference,” Al-Sada said.

He said the next Ordinary Meeting would convene in Vienna, Austria on May 25, 2017 to review the implementation of the agreement.

A breakdown of the agreed oil production adjustment made available to the media by the OPEC Secretariat after the conference shows that Saudi Arabia is expected to make the largest contribution by cutting production by 486,000 bpd.

Meanwhile Nigeria’s Minister of State for Petroleum, Ibe Kachikwu said vandalism of crude oil pipelines and militancy activities in the Niger-Delta was the reason Nigeria was exempted.

“We are grateful that the OPEC was understanding of the case we made about why Nigeria needs to be exempted from this cut.

This gives us time to get our house in order by resolving the Niger-Delta crisis. Already production in Nigeria is up to 1.9 million barrels and we expect to get it up to 2.2 million but not flood the market.

We all have the responsibility to contribute to the tightness of this market,” he said.

Kachikwu said the cut would re-balance the price of crude oil globally and projected that oil prices would go up to $60 per barrel.

Related Topics:Ibe KachikwuOrganisation of Petroleum Exporting Countries (OPEC).
Up Next