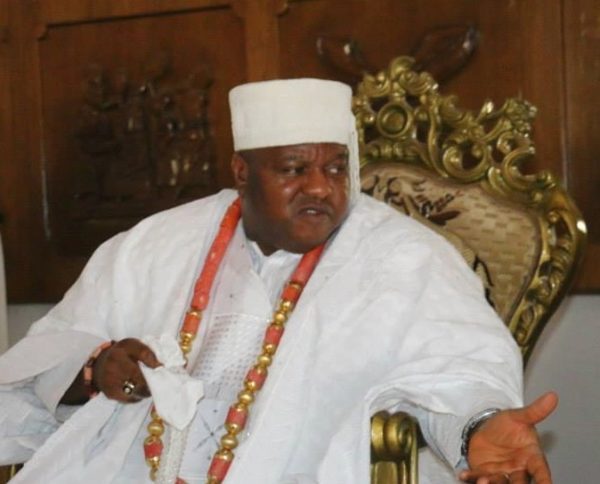 Governor Adams Oshiomhole of Edo state, who leaves office next week, has suspended the Uromi King Zaiki Edenojie II for one year, effective from Monday.

In addition, the monarch who rules the home town of Chief Tony Anenih, the PDP big gun, will lose all his rights and privileges that he had hitherto exercised and also lose a share of the five per cent revenue accruing to the local council.

The Edo State Government announced the king’s suspension late on Friday for failing to apologise within the stipulated period to a woman, Betty O., whom he allegedly assaulted on September 28, among other infractions.

In a suspension letter dated November 4, 2016 signed by the Secretary to the State Government, Prof Julius Ihonvbere, the one-year suspension takes effect from Monday, November 7.

“The Governor of Edo State, Comrade Adams Aliyu Oshiomhole is in receipt of your letter of 28th October, 2016 on the above subject matter. Mr. Governor observed that your activities since you were initially suspended from office as Ojuromi of Uromi have raised issues that require further determination.

“It is important, for record purposes, to recount what has led to the present situation. Discounting your previous conduct, on the 28th of September 2016, you left your Palace during voting and moved from polling booth to polling booth campaigning and trying to coerce voters to vote for your preferred party and candidate; you went to a polling booth which was not where you registered to vote and tried to compel others to vote for your preferred candidate; when one of the voters, Betty O. refused to yield to your threats, you assaulted her causing grievous bodily harm.

“Following from this, the Government, viewing your conduct as utterly embarrassing, disgraceful and unbecoming of a traditional ruler, issued you with a query and directed that you reply within 72 hours.

“You ignored the query, travelled not just out of your domain but outside the country without permission. The flagrant arrogance of power and disregard for constituted authority compelled the State Executive Council in Session to suspend you from office as Ojuromi of Uromi for 7 days in exercise of its legal powers. You were directed not to parade yourself as Ojuromi, carry out any activity as Ojuromi, to apologise to Betty O. and also to the Edo State Government.

“It is instructive to note that in your “Letter of Apology” of 28th October, 2016, you trivialised the gravity of your misconduct by describing what took place in public glare on the 28th of September, where you were the assailant as an “altercation” and “family” affair. Your public assault and disgrace of a citizen of the Federal Republic, in your estimation, was a non-issue.

“To ridicule the Edo State Government and deride the directive that you apologise to Betty O., you proceeded to organise a “forgiveness Session” in your Palace, in your capacity as Ojuromi, wearing a crown even when you were still suspended from Office, purporting to be “forgiving” Betty O.

“At the said “forgiveness Session”, you compelled the victim of your assault to apologise to you for the assault against her person, while on her knees and made to remain in same position while being interviewed by journalists.

“You had the embarrassing session videoed and aired repeatedly on television subjecting Betty O. to double jeopardy and double disgrace by expanding the frontiers of her embarrassment to a global level through the electronic and social media. This represents nothing short of a deliberate effort to further aggravate the pain and humiliation of your victim.

“You claimed in your letter that Betty O. had “reconciled herself to the Throne” which conveys the impression that you still represented the Throne from which you had been suspended, and further stated that she is your “subject” and you had “forgiven” her. This was in gross violation of the terms of your suspension from office as provided for in extant laws.

The Government of Edo State does not accept that there are “subjects” in Nigeria but citizens of the Federal Republic.

“You will recall that the assault on Betty O. which was incidented at the Uromi Police Station on September 28, 2016, remains under investigation by the Police as a criminal act. This act, which in itself negates expectations from the exalted office of a traditional ruler, cannot be tolerated by the government in a constitutional democracy.

“Government has also received official security reports as to your high handedness in addressing relations with operators of the cattle market in Uromi to wit: unilaterally dissolving their association; appointing your preferred person to head the association, banishing their elected leader from Uromi, illegally taking over the cattle market and stalls that they built themselves, banning about eight butchers from doing business in the Uromi market and assigning the responsibility for collecting revenue for the Local Government Council to your own preferred person even without authority from the Council. You equally laid claim to ownership of the land, which was legally allocated to the cattle marketers in the year 2000, among other infractions. These are not the actions of a law abiding traditional ruler who believes in promoting peace, unity and development in Uromi communities.

“The Government of Edo State has high regards for traditional institutions and for the values and customs of our people. However, the Government, shall, under no condition, tolerate indiscipline, reckless abuse of traditional privileges, disrespect for its pronouncements, and flagrant humiliation of law-abiding citizens of the State.

“In view of the facts established above, taking cognizance of your letter of apology that falls short of the public apology expected from you within the stipulated time, and the earlier suspension letter which had specified dethronement after 7 days; in exercise of its powers, the Government of Edo State hereby commutes your dethronement to a one-year suspension from office as Ojuromi of Uromi in accordance with Section 28 (1) of the Traditional Rulers and Chiefs Law (1979) with effect from the 7th of November, 2016.

“During this period of suspension under extant laws, you are hereby stripped of all the privileges and rights of the Ojuromi of Uromi and barred from performing any duties whatsoever in that regard. By virtue of this suspension from office, your remuneration from the 5 percent monthly FAC allocation to the Local Government shall be appropriated and donated to orphanages during this period.”

Mariah Carey & Billionaire James Packer’s Prenup – $6 million for each year of marriage – and Yes! He agreed to a $50m breakup fee