The Face of Okija 2016 search for a King & Queen is on - Apply NOW and Win the Coveted Crown ! Application ends on December 10th 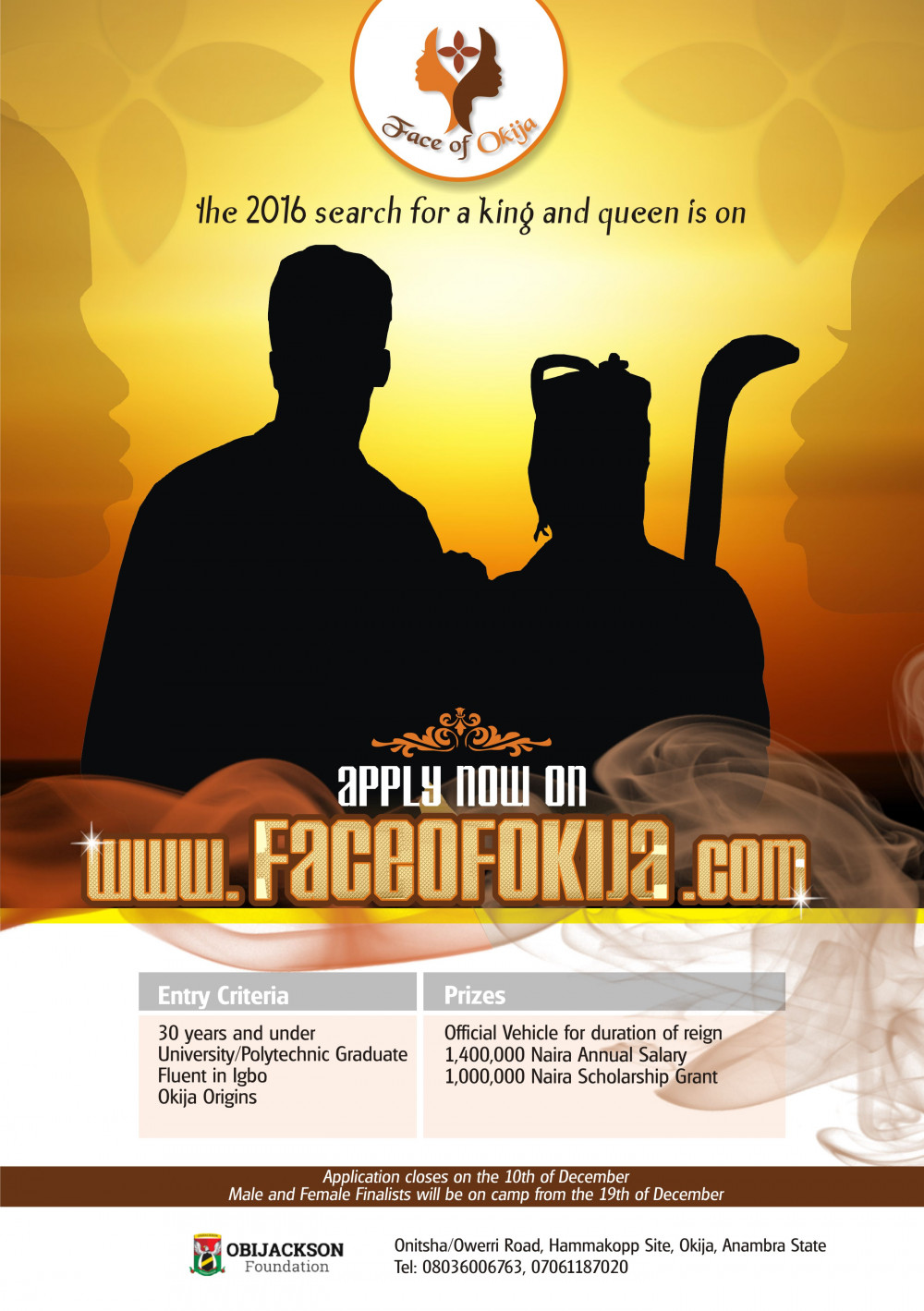 On the 29th of December 2016, the 3rd ‘Face of Okija’ pageant which promotes humanitarian service and Igbo culture will hold in the town of Okija in Anambra State.

The Face of Okija is a beauty pageant with a difference. It is a rich cultural event aimed at rejuvenating Igbo culture which has been badly eroded by all manner of external influences. The Face of Okija supports and promotes Igbo language and culture and lays great emphasis on the qualities of the archetypal African woman which include honesty, decency, modesty, humility and service. This is the true definition of beauty. This is the beauty celebrated at the Face of Okija pageant.

This year, the contest which is open to citizens of Igbo land at large and indigenes of Okija in particular, introduces a long-awaited twist with the introduction of a male category. The Face of Okija pageant winners will be announced the Queen and the King will become ambassadors of the ObiJackson foundation for the duration of their reign.

Prior to 2016, publicity for the pageant was limited to Okija and its environs, however, the foundation has taken a big step this year by extending the reach of its recruitment message by adding online advertising to reach indigenes all over Nigeria and hopefully in Diaspora. On the reason for these two big decisions, the founder of the Foundation Dr. Ernest Azudialu Obiejesi had this to say; “In all things, males and females represented including creation and especially in service to humanity, so the Face of Okija must reflect this duality.”

The competition is open to Igbo and Okija indigenes below the age of 30 who are fluent in Igbo and hold a minimum of a polytechnic or university degree.

This year, the King and Queen will be hired by the foundation and will earn a fixed salary of 1.4million for one year, an official vehicle for the duration of reign, a scholarship grant of one million naira (N1,000,000 ) and a chance to impact the lives of the indigenes of Okija, Igboland  and Nigeria positively through a mix of social welfare programs that they will be required to champion.

Chioma Uzoh who was crowned in 2014, said her biggest learning in working with the various divisions of the foundation over the last two years was  “ Learning to be more tolerant, patient, humble, and being extremely passionate about charity work, one can attest to the fact that with all these attributes improves one’s life”