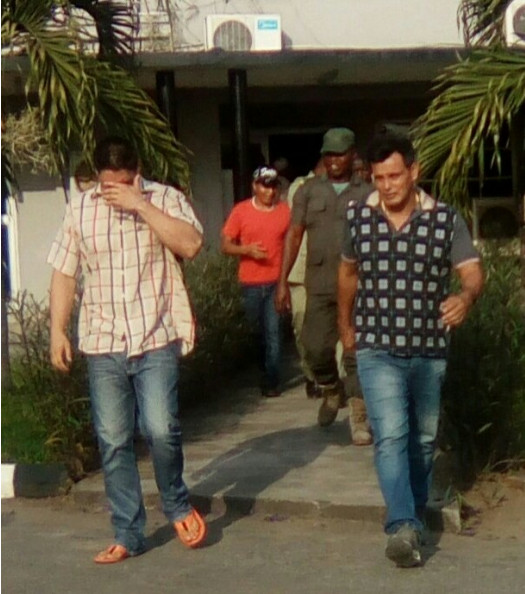 Three Bolivians – Reuben Ticono Jorge, Yhugo Chavaez Moreno, and Yerko Artunduago Dorado – have been jailed six each years by a Federal High Court in Lagos  for unlawful production of controlled drug known as Methamphetamine, a drug similar to Cocaine, Heroin and LSD.

The trio were convicted on November 21st after they changed their plea to guilty over the two count charge of drug related offences leveled against them by the National Drug Law Enforcement Agency (NDLEA).

NDLEA’s prosecutor, Abu Ibrahim then tendered several documentary evidence, which include certificate of test analysis, drug analysis reports, their written statements written in English and Portuguese and other incriminating materials used in producing the banned drugs.

They were all admitted as exhibits by the court.

The presiding Judge Oluremi Oguntoyinbo then reserved judgement against the Bolivians till today, following the mercy plea by their lawyer, Benson Ndakara, who urged the court to consider  the period they had spent in prison custody.

Delivering judgment in the criminal charge, Justice Oguntoyinbo, said the jail terms prescribed by the NDLEA Act for count one of the charge is life imprisonment without prescribing minimum sentence.

The judge also stated that the prescribed jail term for second count is 25 years without prescribing minimum jail terms.

Consequently, Justice Oguntoyinbo sentenced  the three Bolivians to six years on each count. The prison terms will run concurrently.

She ordered that the jail terms should start  running from February 2nd, 2012 when they were arrested and have been in prison custody.

She also ordered that the drugs seized from the convicts should be destroyed by the officials of the anti-drug agency in the presence of the accused counsel.

The Bolivians however still have another case to answer.

They were re-arraigned alongside two Nigerians; Basil Ikechukwu Uzoka and Uba Ubachukwu Collins on a six count-charge of  unlawful production and storage of the controlled drug.

However, one of the Nigerians, Basil Ikechukwu was slammed with  three counts. He was not only charged with allowing the said property to be used for the unlawful storing of the controlled drug, but also charged with aiding and financing the convicted Bolivians in production of the drug.

After the charge was read, Collins’ lawyer, Mackings Ezenya told the court that his client was dead.

He sought to prove his demise with an affidavit deposed by him.

But the prosecutor, Abu Ibrahim, urged the court to discountenance the affidavit as  it was not supported with any doctor’s report certifying that the accused person was dead.

Justice Oguntoyinbo ordered the lawyer to attach a death certificate from either government or private hospital indicating that the accused person was truly dead .

When Uba Collins was arrested in February 2012 by the NDLEA, his age was put at 23.

He pleaded not guilty to the charge.