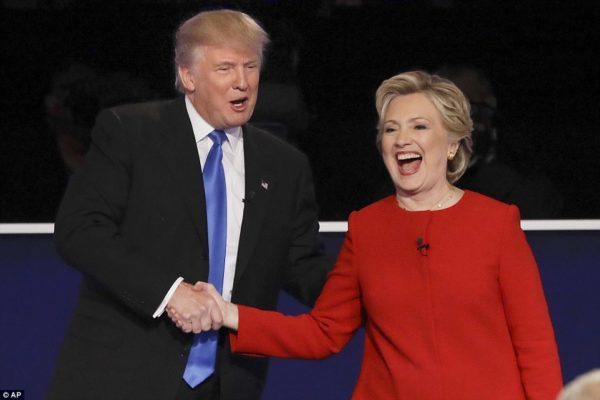 Six weeks after the November 8 U.S. presidential election, the battle for the White House is yet to be over as the 538 electors formally cast their votes for either Democratic Party’s Hillary Clinton or Republican Party’s Donald Trump on Monday.

Although, technically the President-elect Trump won the electoral college on November 9, officially, he has not been voted for.

Under the U.S. Constitution, the real presidential election takes place on December 19, when electors meet in the 50 state capitols and Washington, D.C. to cast their ballots.

To be elected a president, therefore, a candidate must score 270 Electoral College votes, representing 50 per cent plus one vote or a simple majority vote.

As the electors prepare to vote on Monday, there are reports that many Republican electoral college members have been besieged by phone calls and e-mails to vote against Trump.

Clinton’s victory in the popular vote, by a margin of close to three million but not the electoral vote and controversies about Trump have generated unusual interest in the electoral college.

Trump needs 270 electoral votes on Monday to claim White House and his victory in various states in the  November 8 election put him in line to get 306 of the 538 electoral college votes as against Clinton who had 232.

Clinton’s almost three million over Trump’s, made him the most unpopular president-elect since 1876 and heightening the tension in recent weeks.

Already 18 notable U.S. actors and other artists have urged Republican electors to “go down in the books as American heroes” by not voting for Trump.

One elector has resigned, another said he would not vote while electors in three states went to court seeking authority to vote as they please.

The Republican elector from Texas, Art Sisneros, resigned, saying a vote for Trump “would bring dishonour to God”.

Christopher Suprun, a Texas elector, said he would not vote for Trump, who won his state’s election.

“Donald Trump lacks the foreign policy experience and demeanour needed to be commander in-chief,” he said.

In California, a Federal Judge scheduled a hearing on a similar request from an elector, Vinzenz Koller, who said he could not vote for Clinton.

Courts in Colorado and Washington have rejected  pleas from electors to be released from requirements to vote as their states did, although the electors in Colorado appealed the lower court ruling.

The state Supreme Court will have until noon on Monday, when electors cast their ballots, to decide.

On Sunday, John Podesta, Clinton’s campaign chairman, suggested that 37 electoral voters bound to Trump could defect, which would be enough to create at least a tie and send the votes to the House to decide.

Podesta predicated his argument on glaring allegations that Russians hacking the emails of Democrats during the election led in part to Clinton’s loss.

He also argued that members of the Electoral College should have an intelligence briefing about the hackings before voting on Monday.

“I assume that our electors are going to vote for Hillary Clinton. But the question is whether there are 37 Republican electors who think that either there are open questions about the purported Russian hackings or that Donald Trump is really unfit to be president and I guess we will know that tomorrow,” Podesta said.

However, Reince Priebus, Chairman of the Republican National Committee, said in spite of the mounting pressures on the electors to vote against Trump “we expect everything to fall in line”.

Priebus, however, confirmed “the only known and so-called ‘faithless’ balloter, who lives in Texas and whose vote goes to Trump but plans to vote for another, yet-to-be-named Republican.

“But other than that, we’re very confident that everything is going to be very smooth,” he said.

Priebus, however, noted “a massive petition drive to get electoral voters to cast ballots against Trump and the alleged harassment of some of the voters, particularly in Arizona, where Trump won 49 per cent of the vote, compared to 45 percent for Clinton, which entitles him to all 11 electoral votes”.

There is no U.S. Federal law on electoral votes while the penalties for violations are minor, such as being disqualified from future balloting, but some states bind their voters to the popular vote.

A total of 29 states have laws that bind the electors, requiring them to cast their votes for whichever candidate won that state’s popular vote but the laws are weak, providing only nominal penalties.

The Supreme Court ruled in 1952 that states do not violate the Constitution when they require electors to pledge that they will abide by the popular vote but the justices have never said whether it is constitutional to enforce those pledges.