Rivers Rerun: Army Rescues 16 Corps Members from Abductors | "It may take our lives but we will resist invasion" - Gov. Wike 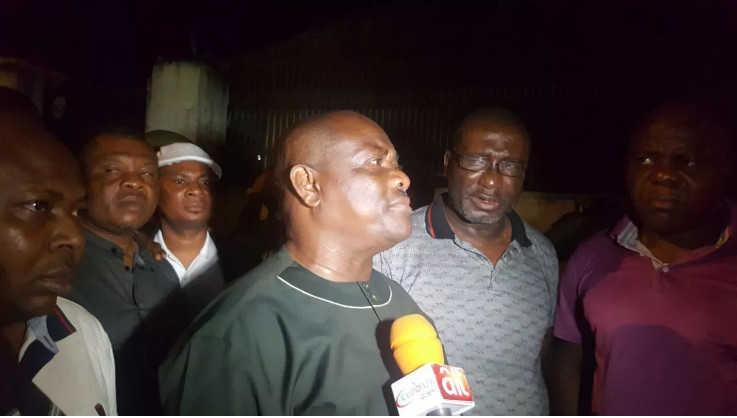 The 6 Division, Nigerian Army, Port Harcourt, has said that its soldiers rescued 16 Corps Members who were abducted with election materials during Saturday’s legislative rerun election in Rivers state.

Maj.-Gen. Kasimu Abdulkarim, the General Officer Commanding of the 6 division made this known while reacting to the allegations made by Governor Nyesom Wike and other politicians, accusing the military of involvement in the election.

Abdulkarim said that the allegations were aimed at tarnishing the image of the army.

“In Abonema there were three explosions that created bedlam.

Subsequently, 11 NYSC members were abducted along with electoral materials.

However, 10 of them were rescued two hours later by the soldiers while one was rescued about eight hours later.

At Emouh 5 NYSC members were abducted with election materials in a Siena bus.

The corps members were rescued while the suspect was handed over to the police.

Several shooting were recorded in some communities such as Bodo, the home town of the Secretary to the State Government, and Mogho in Gokhana Local Government Area, including snatching of ballot boxes.

The most brutal incident occurred at Ujju Community near Omoku in Onelga where police patrol team was ambushed. In the ambush, 10 policemen scampered into the bush.

These attacks are reasonable evidence of violations of breach of law and order which portray the area as a flash point.

In spite these barbarism,  soldiers acted with civility and professionalism in guaranteeing peaceful election,” he said.

Wike had accused the Nigerian Army and the Special Anti-Robbery Squad (SARS) of the Nigerian Police of hijacking election materials in Rivers South-East senatorial district.

He made the remark while reacting to the alleged mass shootings by security operatives in Khana, Gokana, Akuku-Toru and Etche Local Government Areas during the elections.

He also accused the security operatives of killing PDP agents, and working to deliver a particular candidate in the senatorial district.

Wike alleged that the security agents were deployed to the state to manipulate the result of the polls, a claim that ran contrary to INEC and Police interim report about the election.

“The military have been used to rig rerun elections in parts of the state,” he claimed.

He lamented that some wards in Khana, Gokana, Etche and Opobo/Nkoro LGAs, electoral materials were snatched and accused the security personnel of masterminding the act.

Wike claimed that one Charles Anyanwu, an Etche APC Chieftain was arrested with two AK47s.

He alleged that the security agencies might release him.

He said that “in all my political career I have never experienced this kind of invasion by security agencies.

“What causes violence is when you give certain persons undue advantage. Be assured that we are resisting it; it may take our lives, but we will resist it to the last. That is what is expected, when you are fighting for freedom, you must make sacrifices,” the governor said.

Wike however said that he had informed a National Commissioner of INEC and the Resident Electoral Commissioner on the problems in Khana Local Government Area and Gokana LGA.

He said that he was assured that action would be taken.

Major-Gen. Abdulkarim flatly denied accusations made by the state governor.

“It is true that soldiers of 6 Division Nigerian Army provided security during the Rivers legislative re-run election.

These people allegedly accused soldiers of ballot box snatching, illegal escorts of some politicians, arrest and detention of voters during the general conduct of the elections.

The weighty nature of these allegations could cause members of the public to view soldiers negatively, hence the need to adequately inform the general public on the true perspective.

The public thus need to consider them as mere farce to garner public sympathy,” the GOC said.

According to Abdulkarim, the 6 Division, Nigerian Army remained apolitical in the conduct of the election. Its soldiers provided perimeter defence to ward off hoodlums and miscreants.

He said that the troops were in no way involved in any form of ballot box snatching, neither were they involved in the escort of politicians as alleged.

“They acted swiftly in response to security breaches in order to enforce the law, provide aid to the police and other security agencies especially in areas like Abonema, Etche, Gokhana, Ikwere, Eleme, Tai, Khana and Omoku amongst others.

Susceptibility of mentioned areas warranted providing security for the electoral officials, voters, international and local observers, in conjunction with other security agencies by soldiers for a peaceful election to thrive in the environment,” he said.

The GOC said those areas were violated by armed men, who engaged security personnel in shootout.

“In Gokhana, armed hoodlums engaged the soldiers providing outer perimeter defence for the electorates,” he said.

Abdulkarim said that the army respected institution with constitutional responsibility to safeguard lives and property, could not watch miscreants and hoodlums abduct,  maim and kill innocent citizens, especially “in senseless attacks.”

He described the accusations of soldiers partisanship as “sham and phoney”.

He said that the division would continue to remain apolitical in the ischarge of its roles.