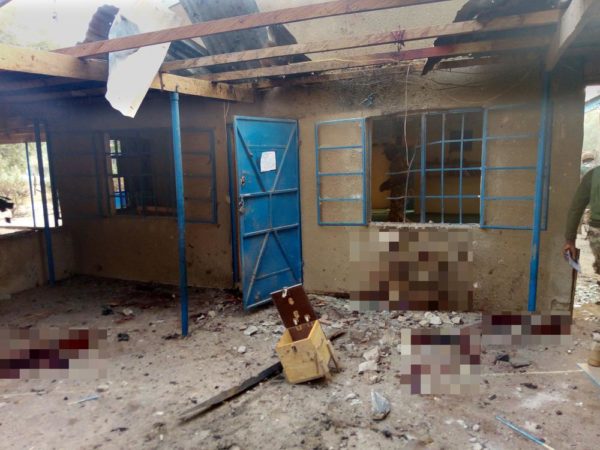 Scene of a Bomb Blast on Monday (16/1/17) where a professor and four other persons were killed when a seven-year-old male suicide bomber detonated his explosive at the senior staff quarters of the University of Maiduguri in Borno. 15 persons who sustained various degrees of injuries have been rushed to the hospital.

A professor and four other persons were killed today when a male suicide bomber detonated a bomb at the Senior Staff Quarters of the University of Maiduguri (UNIMAID), Borno State.

Satomi Ahmed, the Chairman of the State Emergency Management Agency (SEMA) identified the professor as Aliyu Usman Mani, the Director of Veterinary in the University.

“All I can say is to appeal to the people to be vigilant and ensure proper watch because, like we have said, the insurgents are in disarray and employing any tactic to cause havoc. The people must be vigilant at all time,” Satomi said.

The Commissioner of Police (CP), Damian Chukwu, confirmed the incident to newsmen in Maiduguri.

Chukwu said that 15 persons, who sustained various degrees of injuries were rushed to hospital.

“The second suicide bomber, a seven year-old, detonated the second explosive at the senior staff quarters mosque in the university where a professor, and four persons were killed and 15 persons sustained various degrees of injuries and were rushed to the hospital,” Chukwu said.