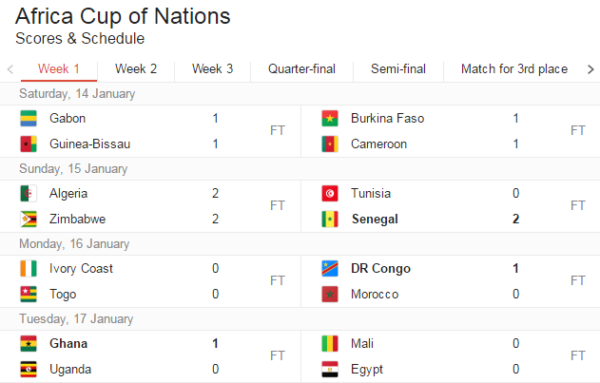 It’s definitely a marathon on draws in the ongoing African Cup of Nations (AFCON) taking place in Gabon.

Of the eight games played so far, there have been 5 draws and two wins (or losses).

Gabon and Guinea-Bissau played 1 – 1 in the first game of the tournament, which began on January 14 2016. This was the same scoreline in the game between Burkina-Faso and Cameroon, played later that day.

At Full Time, the scoreline between Algeria and Zimbabwe was 2 – 2, but Senegal beat Tunisia 2 – 0 to record the first win of the game on Sunday.

Ghana beat Uganda 1 – 0 in Tuesday’s first game, and Mali and Egypt played a goalless draw later in the night.