Go Nina, It's Your Birthday!

At the beginning of the year, Davido announced on his Snapchat that he will be managing himself in 2017 and also stated that you shouldn’t put your life in another man’s hand. This caused some speculation, as people wondered if something had gone wrong between the artist and his manager of 4 years Kamal.

Davido’s hype man of many years, Special Spesh posted a series of messages on Snapchat implying that Kamal has refused to leave them and that his “juju” is too strong.

He also revealed without him, Kamal and Davido wouldn’t have been business partners.

So far there has been no confirmation of the split from Kamal Ajiboye and Davido is still listed as one of the artists he manages on his website. Also, some entertainment sites have reported that Kamal resigned as opposed to earlier reports that he was fired.

See what Special has to say about the drama below. 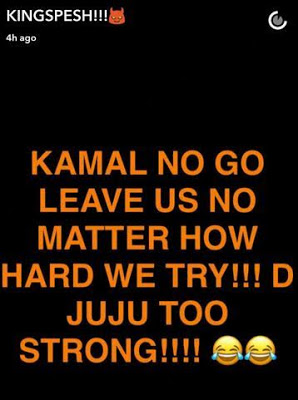 Mercy Johnson & Hubby are “Not Perfect, but Happy” as she Shares New Photos