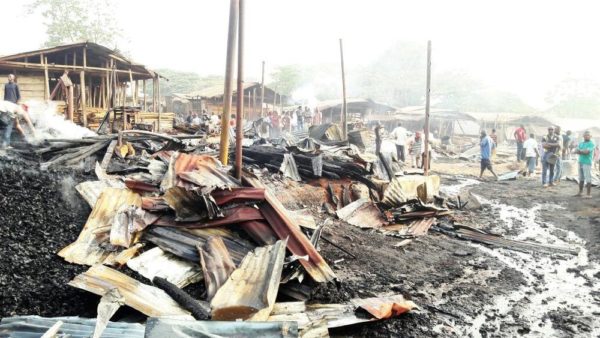 Eyewitnesses said that five traders in the market collapsed and were rushed to hospitals due to shock of losing their valuables in the inferno.

Chukwunonso Nnetu, Chairman of the Nnewi Timber Dealers Association, said that a security guard in the market alerted him around some minutes past midnight about the inferno.

Nnetu explained that fire fighters in Awka, Nnewi and Onitsha fire service stations were immediately contacted to fight the fire.

“The Nnewi Fire Service men later arrived though the fire had reached an advanced stage. We lost about 155 shops, 555 sawing and curving machines valued at N2 million each were destroyed; different categories and quantities of woods and planks, were also destroyed. We don’t know the exact cause of the fire, but we have lost well over N3 billion to the inferno,” he said.

According to him, most of the traders have lost their only means of survival unless government intervenes.

Jude Ugwu, the Secretary to the market association, who noted that the fire affected most processing machines, wondered how the traders would overcome the loss in this time of recession.

Ugwu, who recalled that a similar fire incident occurred in 2002, appealed to the state and federal governments to assist the traders recover from the loss.

Chukwudi Onyejekwe, a Director in the State Emmergency Management Agency (SEMA), described the incident as a “painful and a bizarre situation”, considering the quantity of goods destroyed.

“As you can see, the fire fighters are still battling with the fire since 1AM. The agency will later ascertain the remote cause of the fire. We will assist the traders by pleading with the state and federal governments to come to their rescue through the National Emergency Management Agency (NEMA). We anticipated this and had been moving round the markets sensitizing the traders on how to fight such fires,” Onyejekwe said.

The state Deputy Commissioner of Police in-charge of Operations, Johnson Kokuko, said no life was lost, no casualty and no one was arrested during the disaster.

Kokumo said, “Immediately we got the information, we cordoned the area to ensure that hoodlums did not take advantage of the situation.”

A victim of the fire, Anthony Ezenwa, who disclosed that he had been in the market for more than 15 years, said he lost more than N2 million worth of goods.

Ezenwa appealed to Governor Willie Obiano and other public spirited individuals and organisations for assistance as their sources of livelihood had been consumed in the disaster.

A fire fighter, who pleaded anonymity, said the service was not contacted early, adding that security guards and sympathisers had struggled to put out the fire before it degenerated. 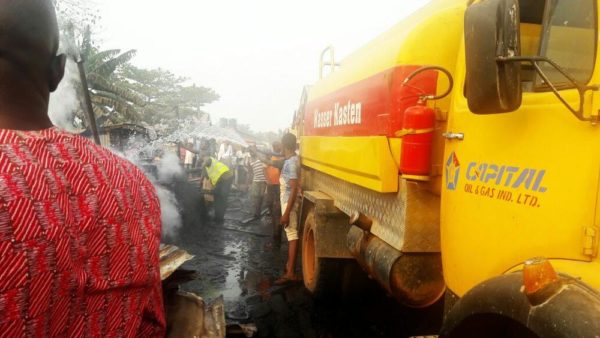 NSE Reviews Composition of Market Indices for 2nd Half of 2016