U.S, Other Countries Have Refused to Return Recovered Stolen Assets from Nigeria - Dabiri-Erewa, Prof. Sagay Appeal to Nigerians to Lend their Voices to Campaign 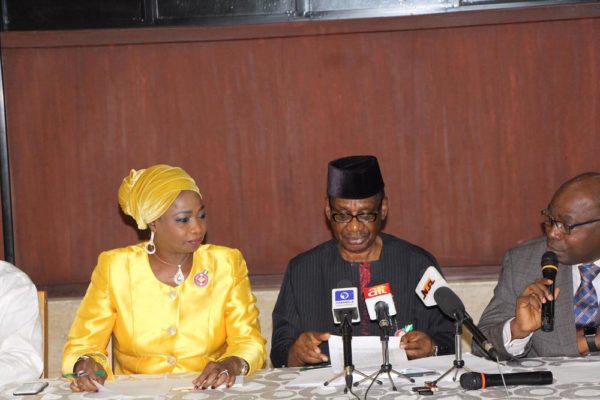 The duo of the Chairman, Presidential Advisory Committee Against Corruption (PACAC), Prof. Itse Sagay and Hon. Abike Dabiri-Erewa, Senior Special Assistant to the President on Foreign Affairs and Diaspora, have called on Nigerians home and abroad to join hands in the call for the unconditional and immediate release of recovered stolen assets of Nigeria stashed abroad.

This was the call made by at a joint press conference in Abuja.

“This is the time for Nigerians in the Diaspora and every friend of Nigeria to get involved in the advocacy to recover stolen assets, not just in words, but in deed. We need no apologies from recipients of stolen assets. Our demand is the unconditional return of our stolen national patrimony,’’ Sagay said.

Sagay assured the Western world that Nigeria as a nation has put in place transparent and credible mechanisms to ensure that returned assets are used for the welfare of the people and the victims of the crime of corruption.

He said the timing could not be more appropriate than now as the nation struggles with recession, reduced income from petroleum products, restiveness in South East and South-South and remnants of insurgency in North East with millions of internally displaced persons representing the victims of corruption.

“Any return will go a long way in helping Nigeria resolve the mirage of challenges it is confronted with. Funds returned for instance can be used to construct roads; build schools, improve education; stimulate the economy, build industries to create jobs; provide quality and affordable health-care; guarantee security of lives and property through proper funding of security agencies,’’ he added.

Using the World Bank estimates, Sagay said that one-third of funds allegedly stolen between 2006 and 2013 could have been used to provide 635.18 kilometers of roads; build 36 ultra-modern hospitals across the country; build 183 schools; educate 3,974 children from primary to tertiary level at 25.24 million per child; build 20,062 units of 2-bedroom houses, among many others.

“Between 1960 and 1999 when the country returned to democratic rule for instance, over $400 billion was stolen by corrupt public officers and laundered outside the country while recent revelations showed that between 2006 and 2013, 55 persons allegedly stole or diverted over N1.34tr from public coffers,’’ he revealed.

Sagay said a large part of the stolen funds are stashed away in countries like Switzerland, the United States, United Kingdom, United Arab Emirates, among others.

Despite the efforts and achievements of President Muhammadu Buhari in fighting corruption and recovery of all the stolen money, some countries have refused to implement the asset return component of United Nations Conventions Against Corruption (UNCAC).

“Nigeria presently stands to lose another $550 million recovered from the Abacha’s family to the U.S. contrary to the earlier promise by the U.S. to return same to Nigeria,” he said.

Sagay said the amount represented a separate tranche from the earlier $480 million forfeited to the U.S. following a court judgment in August 2014.

Speaking in the same vein, Hon. Abike Dabiri-Erewa decried the uncooperative attitude of the countries where the stolen funds were being stashed.

“America has over $400million that have been officially recovered as stolen funds from Nigeria. But America is keeping the funds, they are telling us about technicalities, they are saying we recovered doesn’t mean we can return. We want every Nigerian in Diaspora, friends of Nigeria, to join this committee in demanding that every Nigeria’s stolen fund recovered in any part of the world should be returned to Nigeria,” She said.

The trio of the chairman of ICPC, Barr. Ekpo  Nta, DG, National Orientation Agency (NOA), Dr. Garba Abari and the Executive secretary of PACAC, Prof. Bolaji Owasanoye also decried the stringent conditions for repatriation being given by the western countries.

“We will join the committee to embark on an advocacy with Nigerians abroad to appeal to these nations to do everything possible to return what belongs to Nigeria,” they said.

Boss, Remarkable Mother, Phenomenal Actor! Shaffy Bello is All of These in TW Magazine’s Latest Issue