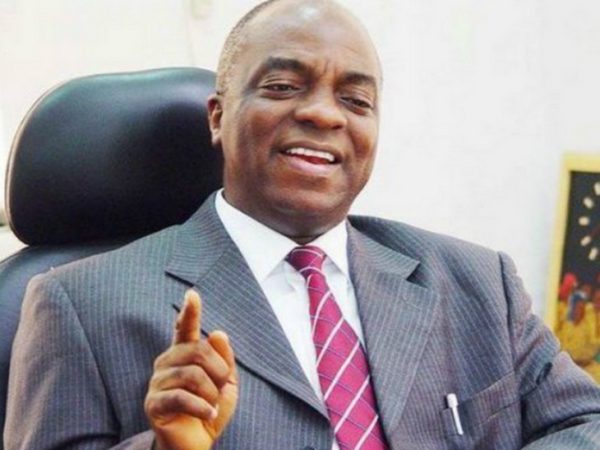 The Living Faith Church Worldwide, aka Winners’ Chapel International, led by Bishop David Oyedepo, has reacted to a video that surfaced online a couple of days ago, where Oyedepo called on Christians to “kill” terrorists attacking churches in Northern Nigeria.

Oyedepo had made the following statement in the video:

“All the northern forces that are sponsoring these uprisings and killings, I decree the curse of God upon them,” Oyedepo said in the video. “Come on, pray in the spirit everybody. Pray in the spirit, open fire, call down the Holy Ghost fire to descend on the camp of the enemy. Enough is Enough! What demonic devils. What Islamic demons. If Nigeria waits for the church to rise, Nigeria will disappear as a nation.”

“I was even told from report that they were targeting this church. I said what? Even if I was asleep, if you see anybody here kill him! Kill him and spill his blood on the ground. I am saying that to you, what nonsense, what devil. You think our God is an idol? I declare their collaborators cursed. I decree their sponsors cursed!” Oyedepo added.

Oyedepo had also said that if it is God’s will for Nigeria to break up, that it should break up.

In a statement by the Chairman of its Editorial & Media Board, Sheriff F. Folarin, the church said that the video was shot in 2015, and that the cleric was not reacting to the recent killings in Southern Kaduna.

Folarin said that the video was shot “at a Sunday service in the heat of the Boko Haram crisis (before the present administration took office), when churches, including our Northern assemblies were under frequent attacks.”

Our attention has been drawn to a salacious piece of fake news in mainstream and social media platforms, that Bishop David Oyedepo, Founder and President of Living Faith Church Worldwide (Winners’ Chapel International) charged Christians to take up arms and attack Muslims in the recent Kaduna killings and that if religious and ethnic injustice could not be addressed, Nigeria could as well break up.

The fake news item, which has been trending online for a couple of days, is supposed to be a report depicting the Bishop reacting to the hostilities between Christians and Muslims in southern Kaduna in which unnumbered persons, mostly Christians have been killed. In this report, Bishop Oyedepo purportedly called out and berated the politicians who were fun-watching while the carnage went on or fanning the embers of the violence, and supposedly noted that there was no basis for Nigeria’s continued unity.

For instance, in the online version of one of the popular Nigerian newspapers (Vanguard of January 12, 2017 reported by one Anthony Ogbonna), the Bishop was quoted as saying: “God has anointed me to lead a revolution against the Islamic jihadists” The Bishop is presented to have made very provocative and inciting comments to his congregation, declaring a counter-war against the Fulani and fanatics in the recent Kaduna crisis.

The report is false. The video from which the quotes were taken is a 2015 video at a Sunday service in the heat of the Boko Haram crisis, when churches, including our Northern assemblies were under frequent attacks. This was before the present administration took office. The message bears no relevance to today’s happenings; not even developments of 2016. The reporter(s), either being completely unprofessional, lazy or simply wicked, made the 2015 message look like a 2017 church service message. The trending video is NOT a 2016 or 2017 video.

To this end, we can unequivocally and authoritatively say that this quote, the report and other similar reports do not fit the context of the Kaduna crisis or any developments whatsoever in the last one year. The reports are therefore fake, unbelievably and maliciously fabricated and outright lies. They are tweaked, baseless, and fraudulent.

Bishop Oyedepo has not said, either in private or public, anything related to the Southern Kaduna killings: not now, not hitherto. If there has been anything done, it has been prayer for peace and unity of Nigeria. The intent of the original author(s) or fabricators is best known to them.

However, what is baffling is the degree of lowliness of today’s journalism practice. If any online media seeking patronage or relevance had bolted to the newsroom with this piece of white lie, shouldn’t the supposedly more responsible ones take ethical steps, namely, to confirm, substantiate and ascertain the authenticity of such claim before going to press and avoid joining the bandwagon of sensational and irresponsible journalism?.

Moreover, our church is an open one, with a website that has online media resources, from which all our audio and video tapes and other materials, from time immemorial, can be freely accessed. All our archived videos are unedited. Also, there are hard copies of all the church messages in our libraries and bookstores. Again, we have a Media and Editorial Board that can be consulted at any time. But, which of these mediums did the writers of the fake reports avail themselves of before publishing?

For the records and for posterity, Bishop Oyedepo will not say any of those things in view of current dire straits in which Nigeria has found itself. There are too many problems at hand, which require divine intervention. He will not add to the throes and utter such divisive words. As a father of the nation and a Pan Africanist in his own right as a religious leader whose ministry spreads across the continent and beyond, he is a huge believer in the corporate entity called Nigeria and has been a messenger of national love, hope, peace and unity.

While he feels for the victimized people across the length and breadth of the country and his heart goes to them, he has always worked with government at all levels to keep Nigeria safe and strongly unified. The Living Faith Church Worldwide (Winners’ Chapel International) has never been a Yoruba church, or a Southern Nigeria church; it has always been a church for all Nigerian church, a platform where all persons of all walks of life bond in the name of Jesus Christ.

For those who may not know, Bishop Oyedepo’s first major break in Christian ministry was in Kaduna, his second home, where he is a friend and father to millions of people of all religious and ethnic backgrounds. “Indeed, our church has been a catalyst for the Nigerian hope and dream and with its two universities and numerous secondary and primary schools nationwide, the church has made it possible for Nigerians to come closer as one people to rebuild our fatherland.